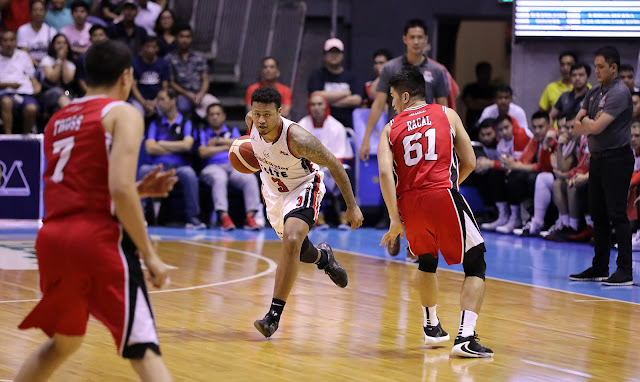 Bobby Ray Parks was the hero for the Blackwater Elite as they defeated the Alaska Aces, Sunday night at the Smart-Araneta Coliseum. Photo courtesy of PBA Images

Quezon City - It was a tale of assertion for Blackwater Elite and complication for the Alaska Aces as they faced each other on their last game in the elimination round of the Honda-PBA Commissioner's Cup at the Smart-Araneta Coliseum on a Sunday night.

The Elites were able walk away with a 112-104 win over the Aces in a close fight from the first quarters up until the early minutes of the fourth - both teams wanting to close the game out with the win that it had 22 lead changes and 13 deadlocks.

Despite Alaska having the edge against Blackwater at the end of the first quarter, the Elites surged in the second period to take control of the ball game and lead at halftime; 55-56.

The game got all the more exciting during the second half as both teams exchanged basket after basket, much to the delight of the fans watching live at the venue.

As the 4th quarter commenced, the game was still at close call until Rabeh Al-Hussaini scored a shot clock-beating triple that gave the Elites a 5 point advantage.

Roi Sumang gave the dagger by scoring in an 18-foot jumper with only 53.2 seconds left to play, giving Blackwater a 7 point edge.

"It was a great game for both team, that’s a treat for the fans tonight. Sobrang hirap kalabanin ng Alaska because they’re so disciplined and well coached but again, may isang dapat manalo and thankful kami na kami yung nanalo. It was also a good come back for us after we have been beaten black and blue byt TnT," says Coach Aris Dimaunahan after the game.


Alaska will most likely play a knockout game against Phoenix Fuel Masters after losing to Blackwater Elite.