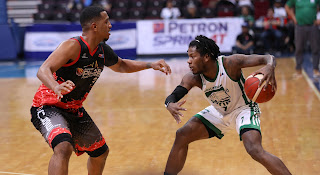 CJ Perez lead his team to win against the Phoenix Fuel Masters, Saturday night at the Mall of Asia Arena. Photo courtesy of PBA Images.

Pasay City - Despite the looming elimination, Columbian Dyip bounces back and trounced the Phoenix Fuel Masters, 100-98 at the Mall of Asia Arena, Saturday night.

Reden Celda's basket with 09.3 seconds remaining in the ball game prevented a possible overtime in a close match between Columbian Dyip and the Phoenix Fuel Masters. His jumpshot tallied the final score.

Close at it may seem, Phoenix set the pace of the ball game and started strong in the quarter, edging the Dyip out 27-22.

However, Columbian surged to outscore the Fuel Masters in the second period, 27-13 to lead by 9 points; 49-40 at halftime.

The second half turned out to be an exchange of leads and baskets for both teams, with Columbian trying to replicate the shots that Phoenix are making. One example of which was when JR Reyes scored a triple to give the edge for Columbian only to find RJ Jazul scoring a triple for Phoenix in return.

Celda scored another triple for Columbian. Phoenix on the other hand didn't lose firepower to try to tie the ball game again as Matthew Wright used his prowess from beyond the arc.

Third quarter closed in with the Dyip ahead by only 2 points; 73-71.

"I told them to just play their game and have fun inside and focus on the tendencies like Wright, Jazul and their import [Howell]. Nangyari naman and we came up to win this game. I'm very happy, although mejo mahirap na kami makapasok sa playoffs but I told them to just win the last two games," says Columbian Head Coach John Cardel.

It was Rashawn McCarthy's triple that paved way for Columbian to edge out the Fuel Masters and have them chasing in the last few minutes of the game.

At the resumption of play off the Columbian time out, Celda heeded the call to score a point.

Phoenix had the chance to walk away with the win with a three-point attempt by Howell but it missed.