AN early showdown between Magnolia and Ginebra in the PBA Commissioner's Cup playoffs could take place.

That's as per how the league's chief statistician, Fidel Mangonon, analyzed the situation between the teams that are still vying for a quarterfinal spot.

With four games left in the elimination round—including the Alaska-Blackwater game that is ongoing as of posting—16 playoff scenarios are still in play.

However, seven of them would lead to a 4-vs-5 battle between the Hotshots and the Barangay, so let's summarize the said scenarios.

With Ginebra likely to beat also-ran Columbian later Sunday, it may need a Blackwater win over Alaska and a Magnolia win over TNT on Wednesday night for the "Manila Clasico" quarterfinals to happen.

With the Elite owning the tiebreaker over the Barangay should both of them win on Sunday night that will put them at a 7-4 tie, the Elite will be the third seeds, while the Barangay will end up with the fourth seeds.

A win by the Hotshots over the KaTropa on Wednesday night will give the former the fifth seed regardless of what happens in the game between the San Miguel Beermen and the Meralco Bolts since the Hotshots hold the tiebreaker over the Beermen should they end up at 6-5 together.

However, the Magnolia-Ginebra playoffs will also be possible even if Magnolia loses to TNT, but that's where the SMB-Meralco game will become a prerequisite as only a Meralco win can make it happen.

In this case, a three-way tie between the Hotshots, the Beermen, and the Rain Or Shine Elasto Painters for fifth place will ensue.

By owning the best head-to-head quotient, Magnolia will finish fifth, while ROS will go sixth and SMB will fall to seventh seed—and a once-to-beat disadvantage against NorthPort in the quarterfinals.

But if in case the Dyip play spoiler to the Barangay later Sunday, the Hotshots can still force the "Clasico" quarterfinals if they defeat the KaTropa or if the Bolts stun the Beermen.

One of the three scenarios in which the said summary can take place, wherein a Columbian win later Sunday and a Magnolia and SMB win on Wednesday could happen, will see Magnolia, SMB, and Ginebra ending up tied at 6-5 for fourth place.

The Barangay, with the best quotient, will stay in fourth, the Hotshots take the fifth seeds, and the Beermen will slip to the sixth seeds.

A Magnolia-Ginebra series could also happen even if Alaska beats Blackwater, but for it to take place, Columbian must beat Ginebra, Meralco must defeat SMB, and TNT must prevail over Magnolia.

If either of the nine other scenarios that will not have a Magnolia-Ginebra quarterfinal series happens, the only time we may see both teams collide in the playoffs could only be in the finals as they will end up in separate semifinal pairings assuming they indeed get past the quarterfinals.

Attached below are the 16 remaining playoff scenarios as compiled by Mangonon himself. 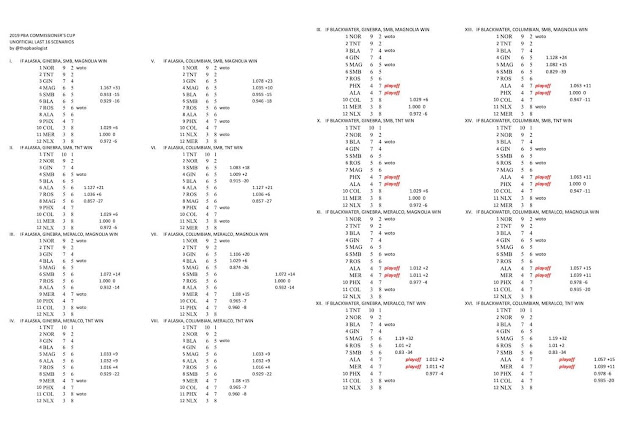