NLEX ends Commissioner's Cup run with a win against Phoenix

NLEX ends Commissioner's Cup run with a win against Phoenix 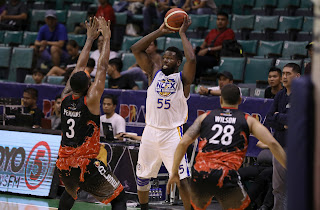 Olu Ashaolu going up against Jason Perkins and Willie Wilson as the Road Warriors played their last game at the elimination round of the Commissioner's Cup at the Cuneta Astrodome, Friday night. Photo courtesy of PBA Images

Pasay City - NLEX Road Warriors ended their Commissioner's Cup journey with a win as they gave the Phoenix Fuel Masters an upset; 87-85, Friday night at the Cuneta Astrodome.

Olu Ashaolu exploded and scored 10 of his 17 points in the fourth period to lead the Road Warriors to their third win.

At halftime, NLEX was leading 13 points against Phoenix but the Fuel Masters were able to hold them scoreless for about 4 minutes at the start of the third quarter.

Phoenix was able to cut the lead further down to 4; 54-58 with over a minute to play in the third period. But the Road Masters were able to recover and sealed off the quarter with them leading by 9; 54-65.

Despite the victory by the Road Warriors, Guiao also expressed his complaint about the officiating of the game that lead to his ejection in the fourth period.

"I don’t think the officiating was up to par to the effort that both teams put into this game and it’s just frustrating that yung mga calls, mga tawagan, they mean a lot to the teams pero pagdating sa mga referees, parang walang kwenta sa mga referees yung mga tawag. They don’t feel what we feel, I think that’s the problem with that. Di nila nararamdaman yung nararamdaman namin, that’s where the frustration is coming from," Guiao explains

In the final stretch of the fourth period, Phoenix tried to come back into the game, cutting the lead down to only 2 points with 25.6 seconds left in the game through Matthew Wright's assist to Justin Chua.