NorthPort narrowly escapes Meralco to end elimination with a win

NorthPort narrowly escapes Meralco to end elimination with a win 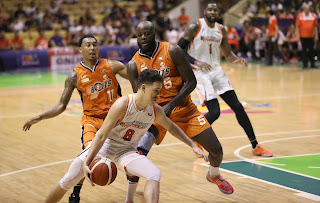 Pasay City - NorthPort wanted to go to the playoffs bearing high spirits by winning against Meralco; 93-92 at the Cuneta Astrodome, Friday night.

Robert Bolick scored the winning shot that gave the Batang Pier the one-point edge just seconds prior the final buzzer.

Meralco was relentless, wanting to walk away with the victory, leading as much as 6 points at the end of the first period but NorthPort was able to chase that lead down and eventually tie the ball game with Nico Elorde's triple, over five minutes left in the second period.

Chris Newsome's basket broke the tie only to to trail by 1 when the possession went back to North Port as Garvo Lanete pops his version of a three-pointer to tally in a 37-38 advantage for the Batang Pier.

But it was Bolick's triple that gave NorthPort the advantage going to the half as he closed the quarter at 43-45.

NorthPort outscored the Meralco in the second period, making 23 points out of only 15 points by the Bolts.

The side of the coin moved in Meralco's favour at the start of the second half as the quarter began with fouls coming in from the Batang Pier side, sending Cliff Hodge and Delroy James in the free throw line, allowing the Bolts to gain the advantage from foul shots.

Meralco was able to avenge their side by outscoring NorthPort, 24-17 to close the quarter with a 67-62 advantage.

Fourth quarter was a story of two teams chasing each other's lead in order to get the win.

NorthPort trailed by as much as 6 points early in the quarter only to get the lead off Ibeh's dunk with 7:16 in the game.

Before the final buzzer sounded, the game was in deadlock for three times in the quarter, and had seen shaky lead changes from both teams until Bolick's shot that sealed the deal for the Batang Pier.