MANILA--Phoenix expressed sadness on the claims of the wife of star winger Calvin Abueva that she is being battered but reiterated that the team will deal on the claims seriously.

"Claims of domestic violence and neglect have no place in our team and are seriously considered and mulled over by the company," the Fuel Masters said in a statement on Tuesday.

On Saturday night, Sam Abueva, using her husband's previous Instagram account, revealed in a live video that she was being hurt by the embattled PBA star.

However, Calvin countered using his new Instagram account, accusing his wife of going out with someone else and claiming that he is now free.

"Once a full and appropriate legal procedure of these allegations is conducted, the team will assess the situation further and from these decide Calvin's fate with the team," the statement from the Fuel Masters continued.

The Fuel Masters also mentioned in the statement that the team consistently provided moral support to Abueva and have continually reached out to the player "despite his unresponsiveness and absence from the team."

The suspension and penalty slapped against Abueva will continue, as per the team statement, until willingness and ability to change his behaviours will be seen in the suspended player.

In parting, Phoenix Fuel Masters stated that they do not condone with any form of violence and other behaviours that violates the trust and values that they share with their family, fans and basketball. 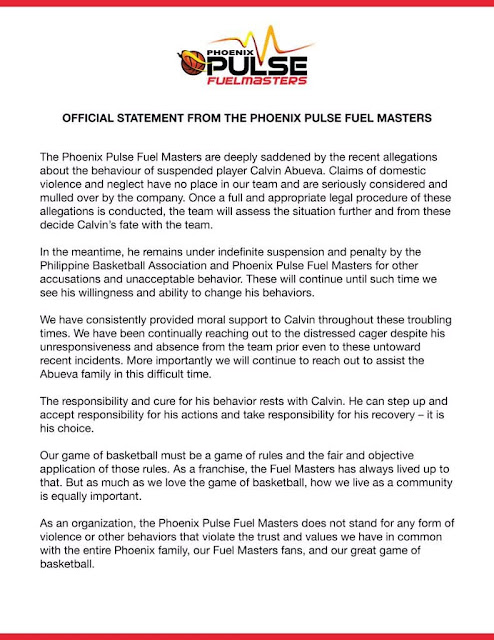