SMB lives another day against NorthPort

SMB lives another day against NorthPort 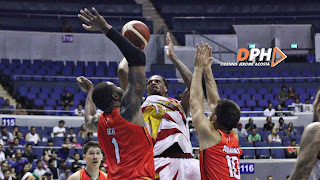 Chris McCullough leads the Beermen with 24 points and 11 rebounds against the NorthPort Batang Pier at the start of their Quarterfinals match at the Smart-Araneta Coliseum, Sunday night. Photo by Dennis Jerome Acosta.

Quezon City - San Miguel Beermen came prepared against the NorthPort Batang Pier as they spoiled their hopes to clinch a semis berth in one game, defeating the second-seeded team; 84-98 on a Sunday night at the Smart-Araneta Coliseum.

It is through the efforts of Chris Ross that the Beermen sees another day in the Commissioner's Cup Quarterfinals, scoring 18 points to go along with 9 rebounds and 2 assists.

The Batang Pier drew first blood in the ball game with Garvo Lanete earning the first point, however, Ross was quick to tie the ball game as the possession moved on the side of the Beermen.

NorthPort held on to a three point lead in the game until Ross' shot from beyond the arc that tied the game to 7-all with 7:51 left to play in the opening quarter. From then, the Beermen were able to sail away and closing the first period with a ten point advantage; 18-28.

Knowing that their twice-to-beat advantage is on the line, NorthPort  surged on the second period and attempted to trim down the lead of the Beermen.

The Batang Pier used their prowess in the outside with Robert Bolick and Kevin Ferrer scoring back to back triples to make it a 36-40 trail.

Despite the lead of the Beermen at halftime; 47-42, NorthPort was able to score 24 points in the period as compared to 19 points of San Miguel.

At the return of play from the break, San Miguel puts up a show as Chris McCullough scored back to back slam dunks much to the delight of the fans in attendance at the coliseum.

NorthPort, on the other hand, did have an unsung hero in Paolo Taha as he scored 6 consecutive points to cut the lead down to 7 points; 64-71.

Christian Standhardinger extended the lead to 9 points off his free throws from a foul by Jervy Cruz; 64-73 but was also caught for an infraction that send Bolick to the free throw line just before the quarter buzzer sounded.

The third quarter sealed off with San Miguel enjoying an 8-point advantage; 65-73.

Bolick opened up the fourth period scoring through a driving lay-up to cut the lead down to 6 points; 67-73 but June Mar Fajardo was quick to extend the lead back to 8 with his jump shot; 67-75.

Prince Ibeh's back to back dunks eventually trimmed down San Miguel's lead to only 4 points; 74-78  inspired the Batang Pier all the more to continue with their chase to survive their challenger. Bolick then hit a massive three pointer that shakes the Beermen advantage to only a point; 77-78.

While things are starting to be good for the Batang Pier side, Nico Elorde and Terrence Romeo were called for double technical foul as tension between the two began to heat up.

Sean Anthony had the chance to hand the lead over to NorthPort with his attempt on a three pointer but he was fouled by McCullough. Anthony was able to score 2 out of 3 shots from the line, giving the Beermen a 1 point advantage; 81-82.

Back to back three pointers coming from McCullough and Arwind Santos paved way for San Miguel to gain a safe lead as the Batang Pier started to miss a lot of opportunities to score a basket.

The Quarterfinals match between San Miguel and NorthPort continues on Wednesday, with the winner earning a spot at the Commissioner's Cup semifinals.