QUEZON CITY - Chris McCullough came to the Philippines almost towards the end of the elimination round of the PBA Commissioner's Cup with one purpose: to win games for the San Miguel Beermen.

McCullough took over the import spot from Charles Rhodes in the San Miguel in preparation for a late run to the playoffs.

He instantly made a statement that he came not only for the Jollibee Chickenjoy but he is here for some serious business - to play his game and to help the Beermen win games.

Since he came to reinforce, the Beermen only lost against the Meralco Bolts, which also happened to be their last assignment in the elimination round going to the playoffs.

McCullough made an impressive debut, scoring 47 points against the NLEX Road Warriors that would have even ended up with 50 points if he did not foul out of the game.

The 24-year old import repeatedly said game after game that he is out here to play his game and to win games.

He also came out to prove that game after game, leading the Beermen in wins against the twice-to-beat NorthPort Batang Pier in the quarterfinals and Rain or Shine Elasto Painters in the semis.

Basketball-frenzy Filipinos were given a treat the moment the Beermen set their date with TnT KaTropa for the best-of-seven finals series, showcasing two of the best imports the PBA has ever acquired; McCullough and Terrence Jones.

From the time C-Mac came to the Philippines, his match-up with Jones was something that everyone has been anticipating and the two did not disappoint, adding more excitement to the already exciting finals series despite all the dramas that goes along with the intensity of the game.

On the Beermen's monumental Game 5 win in the finals that earned him the best player citation, McCullough confidently promised to Coach Leo Austria that they are going for the kill on Game 6.

"We're not letting [the game to] go on Game 7. We're going to win this," McCullough said.

Come Game 6, McCullough and the rest of the Beermen delivered as promised, not letting the TnT KaTropa to get a chance to grab the lead the entire game, proving that they wanted to close the series on a Friday night rather than to allow the series to stretch on its limit and play on a Sunday night.

From here on, August 16th will forever be etched in McCullough's memory as an athlete as he was able to earn his first professional championship.

"[It] feels good to be a champion! My first championship since high school," McCullough said as he faced the media after clinching the championship with the Beermen.

McCullough affirmed what he came in the Philippines for - to play his game and win championship and that fateful night at the Smart-Araneta Coliseum gave him a sort of a flashback of his brief but colourful journey, sharing his talent in the sport with the Filipinos.

"I came here and we're down 2-5, and now we've won the championship!" McCullough said.

His teammates knew that he is a newbie champion that they gave C-Mac the honours to cut the net, however, he had a hard time doing it that Chris Ross eventually had to lend a helping hand to complete the job.

In a selfless act, Ross still handed the net over to McCullough for him to keep as a remembrance of their hard work in the Commissioner's Cup.

McCullough was too proud like everyone in the San Miguel team is, too proud that even in the interview, he was wearing the net around his neck.

In the last game of the conference, McCullough lead the scoring for the Beermen, finishing off with 35 points.

When asked if he sees himself as the "hero" for the Beermen, C-Mac was quick to shrug it off, giving credits to the team work and the coaching staff.

"I just came to help the team, that's it," McCullough asserted

Moving forward, McCullough looks forward to come back to the NBA to continue on with his playing career, but has not closed his doors for the Beermen.

"Hopefully, I'm back in the NBA next year, but if not, you know I'll be back on SMB," McCullough said.

In parting, the newly-minted champion finally talked about his tweet from a few weeks back, seemingly submitting himself to serve and represent the Filipino people as part of Gilas Pilipinas. 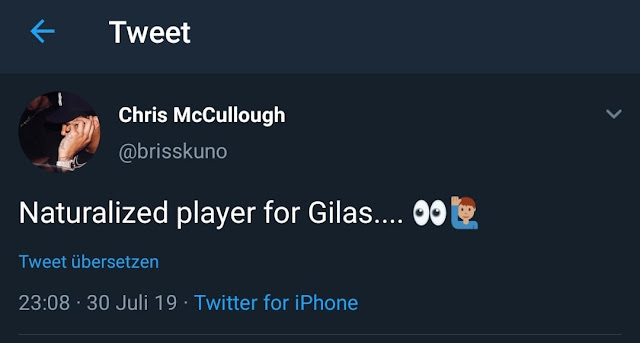 "Yeah, I wanna play, man! If I get naturalized, I wanna play. It's an opportunity for me and I would love to play," McCullough affirms.

A lot of fans believe that McCullough would be a good addition to the Gilas pool as he could be a long-term mainstay, with his age as the top consideration.