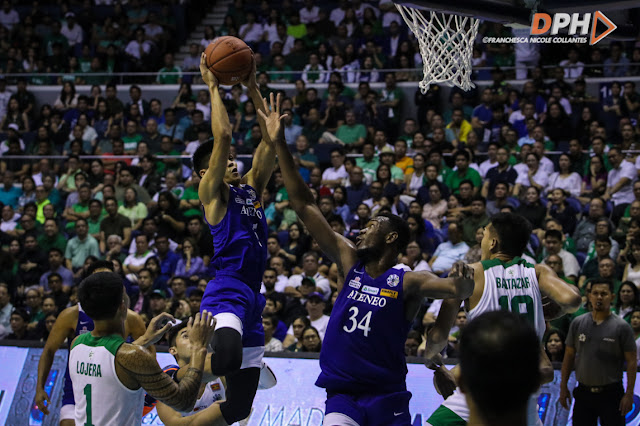 QUEZON CITY - Ateneo dominated once again as they registered an 81-69 win in their first match-up with archrival La Salle in the UAAP Season 82 Men's Basketball Tournament Sunday evening at the Smart Araneta Coliseum.


Ateneo's win against La Salle kept their record clean at 2-0.


Coach Tab Baldwin mentioned, "This is a typical Ateneo-La Salle game. It was tough every step of the way. I think that the break we had at the end of the second quarter was a surprise to us and it was a surprise for them, and in the end it was the cushion I think that we depended on in the second half. I thought there’s a lot for us to work on."

Mike Nieto led the Blue Eagles with 18 points, five rebounds, four assists, and two steals, while his twin brother Matt helped him with 15 points and three boards that greatly helped in the Blue Eagles' win against Green Archers.

Gian Mamuyac also made his presence, surprising La Salle after it got to within eight in the payoff period by releasing timely buckets in the last three minutes before finishing with a career-high 14 points, four rebounds, two assists, and two steals.

Jamie Orme-Malonzo commanded Green Archers as he got 18 points, featuring his slam dunk over Thirdy Ravena in the first quarter, 10 rebounds, and two assists.

Green Archers captain Andrei Caracut chipped in 14 points on 3-of-6 shooting from threes, while Justine Baltazar tallied a double-double with his 10 points, 12 rebounds, and two blocks.