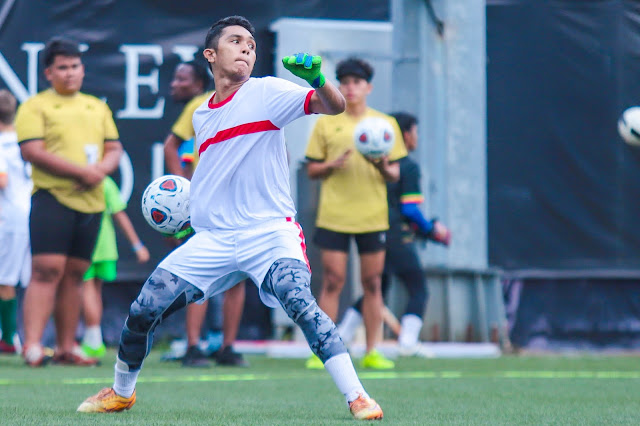 TAGUIG – Season 4 of the Philam Life 7s Football League kicked off at the McKinley Hill Stadium with 66 teams across the Premier Division, Women’s Division, Men’s Division, U15, U13, U11, and U9.

The rematch of the Premier Division finals for the past two seasons opened the tournament with defending champions Ghana FC going up against the Super Eagles.

Scoring the first goal at the 10-minute mark was Stanley Edeme of the Eagles.

With 10 minutes left, Yohann Fofanna countered with a goal but Ghana FC held on to the victory.

“Coming to this game, I told them, we are not going for anything. We just have to play. For them, they are coming for revenge. That is in their mind. We just have to keep calm and work what we know best,” said Ghana F.C. head coach Ayi Bimbo.

David Kaman and Maroo Yhico combined for the two Laro FC goals and it was enough for the team to seal the victory, 2-1.

William Gueridon scored the only goal of Monte Manila FC at the 23-minute mark.

“It is really important to start the tournament with a good win—getting the confidence of the players going. Especially in this league today, there is a lot of good competition out there. It is important we got the first win today,” said Aly Borromeo of Laro F.C.

“What is important is the rotation of the players in a tournament like this. You go all out for 3-4 minutes, sub, get the rotation going. We are lucky enough to get a good coach to take care of the substitutions. We did the rotations pretty well and we came out with two crucial goals, and we caught one in the end due to six fouls. We still got the victory, that is what is important,” Borromeo added.

Starting off at the right foot, Superbad Pride FC, who struggled last season, are looking formidable with a 4-2 victory over Tondo FC to secure early in the tournament their first win.

“We wanted to win this one so bad. We talked before the start of the game—last season we started at the bottom, the best way for us is to win our first game,” said Iggy Halili of Superbad Pride FC.

Real Amigos made a good impression in their first game by shutting down the Futbol Funatics, 2-0.

With the team’s intense preparation, Coach Lerche Njang hopes to live up to the expectations of their fans.

“We are really prepared for this. We hope to live to the expectations. We know that the league is very tough now. There are a lot of players coming in, ex-professionals—it is a strong league. I think we have what it takes to go far,” said Coach Lerche Njang.

Bohemian Sporting Club had a hot start with two consecutive goals from Hamed Hasimehdi and Izo El Habib to control the game.

A comeback fell short for Mondo International as Wushoma Tatzuda scored the team’s first goal but time ran out on them.