Matthew Wright saves Phoenix Fuel Masters to walk away with their first win vs. Barangay Ginebra

Matthew Wright saves Phoenix Fuel Masters to walk away with their first win vs. Barangay Ginebra 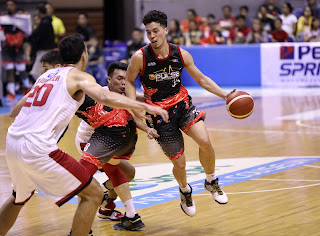 Matthew Wright was the right person to lead the Fuel Masters to their first victory of the conference at the expense of the Barangay Ginebra Gin Kings. Photo courtesy of PBA Images.

Manila - The Phoenix Fuel Masters had beaten all the odds to give the heavily favoured Barangay Ginebra Gin Kings an upset; 103-101, Saturday night at the Smart-Araneta Coliseum.

Eugene Phelps had a good night, scoring 27 points 23 rebounds and 11 assists to earn him a triple double but it was Matthew Wright that turned out to be the hero that the Fuel Masters needed to win against a resilient Barangay Ginebra squad.

In the onset of the game, Phoenix made a statement that they want to take this game and gave an early challenge for Barangay Ginebra. The Fuel Masters were in fact, too hot for the Gin Kings to handle as they succumbed to a 17-point trail; 41-24 at the end of the first quarter.

Phoenix continued their asssault at the second period with them leading as much as 23 points; 51-28 after Justin Chua scored from a lay-up.

The Gin Kings, through the effort of Scottie Thompson was able to trim it down to a 21-point trail; 51-30 but Phelps was quick to bring is back to a 23-point advantage off his basket, making it a tally of 53-30.

Ginebra was able to wind the lead down to a 13-point lead; 57-44 by the end of the second quarter.

Jorey Napoles opened the scoring for the Fuel Masters at the second half, making them lead by 15 points; 59-44 but Ginebra knew the right buttons to push to fight back against the tough defense given to them by Phoenix.

LA Tenorio scored 9 straight points for the Gin Kings to help them stay alive in the ball game, trimming the lead to 7 points; 62-55.

After 3 quarters, Phoenix remained ahead of the Ginebra; 81-66.

It was an unfortunate start of the fourth period for the Fuel Masters as Coach Louie Alas was sent out of the ball game with 9:09 to play after incurring his second technical foul. The Phoenix Head Coach was first called for a technical foul late in the third period. Assistant Coach Topex Robinson took the helm for the team after Alas was asked to leave the playing court.

The Gin Kings took advantage of the ejection of Alas in the game as they relied again to Tenorio to lead Ginebra, along with the help of Justin Brownlee.

Tenorio and Wright took turns in scoring from the three point area and later on, Stanley Pringle joining in the three-point shooting spree, cutting Ginebra's trail to 11; 95-84.

But it was Tenorio's massive triple after the last 2 minutes of the game that turned the tables for Ginebra as he was able to cut the lead down to just 6 points; 101-95.

As the game clock started to wind down, Pringle scored a basket that trims their trail to just 2 points; 101-99 that signaled Robinson to call a time out.

At the resumption of play, Brownlee was able to make a steal and a quick basket to tie the game at 101-all with only 12.8 seconds remaining. Luckily for the Fuel Masters, they still have a time out to call which they were able to utilize to set up a play.

With only 5.1 seconds remaining in the ball game, Wright bravely took a shot that broke the tie and prevented the game from taking five extra minutes to determine the winner.

Wright finished off with 28 points, 3 rebounds and 3 assists.