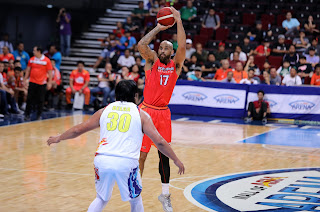 Mychal Ammons scored 25 points to lead NorthPort Batang Pier to its first win in the Governor's Cup at the Mall of Asia Arena. Photo courtesy of PBA Images.

Mychal Ammons lead the Batang Pier in dominating the game from the first quarter up until the final buzzer, not allowing the Elasto Painters to come close in the game.

It was only at the first period that Rain or Shine was able to tie the ball game twice. First was at the 6:02 mark of the game with Joel Wright scoring a jump shot to make it 8-all. Ammons's split free throw broke the tie and it was followed up by a basket made by Robert Bolick, giving NorthPort a 3-point edge with over 5 minutes left in the quarter.

Beau Belga connected from the 3-point area and tied the game at 11-all until the deadlock was broken by newcomer Jerramy King, giving the Batang Pier a 2-point advantage; 13-11 with over 4 minutes left to play.

After Javee Mocon converted 2 points worth of foul shots to make it an 13-18 trail for the Elasto Painters, the Batang Pier boys made a 6-0 run that also sealed off the opening quarter score at 29-13.

The Elasto Painters began the second quarter in the right footing as Gabe Norwood broke the scoring spell with a jump shot to cut the trail to 14 points; 29-15.

Rey Nambatac and Wright combined forces to score basket after basket for Rain or Shine to try to trim down NorthPort's lead but the Batang Pier is resilient in keeping the advantage on their side.

Wright was quick to score on a basket to give a glimmer of hope for the Elasto Painters as the lead narrowed down to 18; 49-31 with over 2 minutes left in the second period.

James Yap then converted 2 points worth of foul shots from an infraction by Mo Tautuaa which further cuts the trail to 16; 49-33.

Ferrer, however, seemed as if he is not yet satisfied with their advantage that he added three more points to make it a 19-point lead after scoring from the rainbow line; 52-33. Nambatac sank a counter-attack to tally the score at 52-36 with over a minute left to play.

NorthPort walked into the locker room on a high note as they closed the quarter enjoying a 20-point lead; 58-38.

Rain or Shine came in prepared at the start of the second half with Mocon scoring 5 quick points, trimming the trail to 17 points; 60-43.

Despite NorthPort consistently protecting their lead, the Elasto Painters held their ground and continued on trying to counter each basket that the Batang Pier side are making. Jewel Ponferada and Norwood scoring outside shots while Belga connecting a shot from inside the paint kept Rain or Shine in the ball game, slowly slashing the lead out of their opponent's hands.

Third period ended with the Batang Pier still ahead; 83-66.

The fourth quarter started on the wrong footing for North Port as Ferrer was caught guilty of a foul against Belga that sent the latter at the free throw line, resulting to 2 easy points to tally in an 83-68 score.

Nambatac scored 6 straight points for the Elasto Painters just before the final two minute mark of the game that allowed them to trail by only 4 points; 91-87.

Ammons and Bolick combined forces to bring their advantage back to 10 points; 97-87 until Yap scored a massive triple to make it a 7-point trail for Rain or Shine; 97-90.

Wright and Exciminiano both converted baskets to further trim the lead down to 3 points with only 0.04 seconds left in the game.

Bolick sealed the final score at 99-94 off his free throw shots.