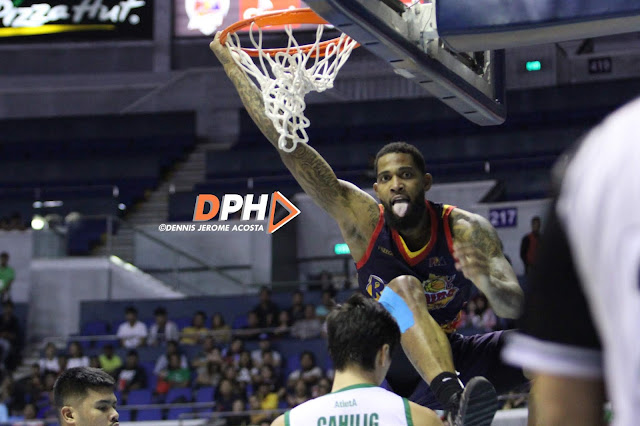 QUEZON CITY - The Rain or Shine Elasto Painters avenged their conference opener loss at the expense of the Columbian Dyip, 96-90 at the Smart-Araneta Coliseum, Sunday afternoon.

Foul trouble hounded Joel Wright in the first half, but he still emerged as the top performer for the Elasto Painters finishing off with 30 points and 10 rebounds.

The Elasto Painters were in command of the opening quarter which sealed off with them leading, 23-14.

But Columbian surged come the second quarter, with CJ Perez scoring 10 straight points, including 2 triples to hand the lead over to the Dyip.

Rashawn McCarthy added damage by scoring 6 quick points from the outside giving a 7-point advantage to Columbian.

Rey Nambatac scored two triples to trim the lead down to 3 points, while Ping Exciminiano converted another for Rain or Shine to close the quarter at 44-all.

Columbian was able to break the tie at the start of the second half, leading against Rain or Shine, mostly scoring from the outside.

They took advantage of the technical foul called against Coach Caloy Garcia that sent McCarthy at the line to give the Dyip a 4-point lead; 62-58.

Khapri Alston was forced to sit down just midway to the 3rd quarter after incurring 2 consecutive offensive fouls which led him to foul trouble.

Alston's absence figured for Columbian as their lead quickly vanished, eventually leading to a deadlocked ballgame after Javee Mocon scored the equaliser.

Perez failed to convert charities off a foul by Jewel Ponferada that gave way for Rain or Shine to snatch the lead away.

Mark Borboran and Ponferada succeeded in securing the lead for the Elasto Painters as the quarter closed with them enjoying a 3-point advantage; 66-63.

Columbian and Rain or Shine exchanged baskets and leads in the fourth period that made the game all the more intense, much to the delight of the fans.

Their lead changes even threatened to take the game into overtime until Wright tied the ball game to 89-all that turned the tables of the game.

Despite the foul trouble, Wright worked his way to prove that he can take the Elasto Painters to a victory by scoring 6 straight points prior to the free throws given to Ed Daquioag to seal the final score at 96-90.