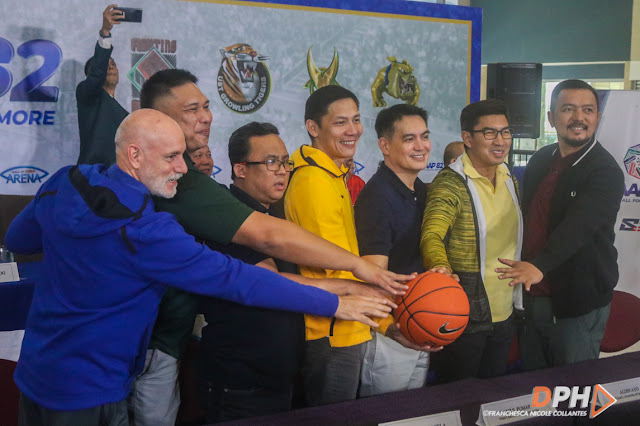 PASAY CITY - Without a doubt, defending champion Ateneo de Manila University was chosen by the majority when the coaches was asked the team to beat this UAAP season.

Ateneo coach Tab Baldwin welcomes the pressure as Ateneo is now on its aim for three-peat.

He mentioned, "I know expectations are high for our team and it's our job to play the best basketball as we can."

Blue Eagles key players, Thirdy Ravena, Isaac Go, and the Nieto Brothers, Matt and Mike, will play their last season for the Blue Eagles this Season 82.

"It's a given that Ateneo is going to be on top," said UP coach Bo Perasol.

"It's quite obvious already. It's Ateneo and they should be rated number one. From player one to 16 skills-wise, they're all the same," said Pumaren.

Aside from Ateneo, UP, Adamson, La Salle, FEU and UST were also tagged as teams to beat.

Ricci Rivero and Kobe Paras will debut for the Fighting Maroons this season.

Pumaren then mentioned that this season's Soaring Falcons will be one of the youngest teams he's ever handled and hopes that the Falcons will adjust to the seniors level right away.

DLSU will be having three "one-and-done" players for Season 82.

For Coach Olsen Racela of the Tamaraws, he mentioned, "You'll be seeing a different FEU team. You're used to see experienced players, but half of our team are rookies so were investing on our youth and hopefully, matulungan nila kami."

For NU and UE, there are also no pushovers as their players will be competent for this season.

"We'll be very competitive and we're excited to compete and show what we can do for this season," said Bulldogs coach Jamike Jarin.

NU will be led by Shaun Ildefonso together with Dave Ildefonso and John Lloyd Clemente.

The men's basketball games will begin on Wednesday at the Smart Araneta Coliseum.