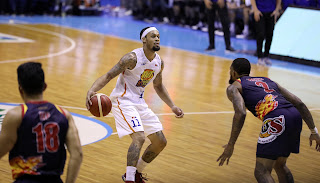 KJ McDaniels lead the TnT KaTropa to their second straight victory at the expense of the Rain or Shine Elasto Painters. Photo courtesy of PBA Images.

KJ McDaniels scored big to lead the KaTropa to its second straight win in the conference, finishing off with 37 points and 13 rebounds.

Even Samboy de Leon scored massive shots from the outside to help TnT to dominate the ball game from start to finish.

The KaTropa were able to contain Rey Nambatac from scoring. The Elasto Painter sophomore was limited to just 5 points in the entire ball game.

Joel Wright lead Rain or Shine's scorers with 20 points and 8 rebounds but had to sit out in the last 3:50 of the 4th quarter as he was found guilty of tripping Rosario. Wright was given Flagrant Foul Penalty 1 that forced him to sit out for 3 minutes.

Javee Mocon and James Yap stepped up for the Elasto Painters, finishing off with 19 and 18 points, respectively but their efforts were not enough for the relentless KaTropa.

Rosario finished the game off with 16 points while Castro has 15. Pogoy and Don Trollano had 12 points apiece.