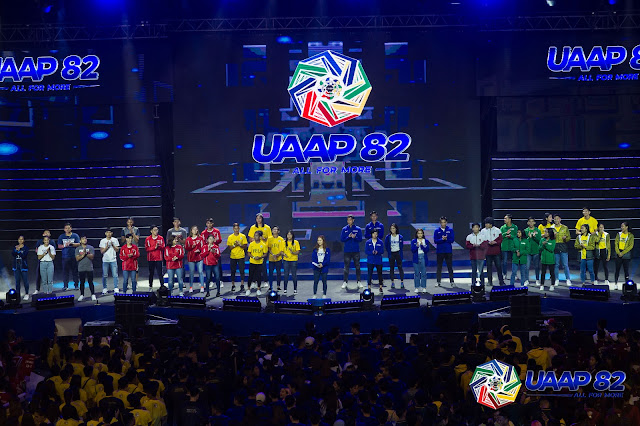 PASAY CITY - The University Athletics Association of the Philippines opened Season 82 with an opening ceremony that served as a send-off for the league’s athletes Sunday afternoon at the SM Mall of Asia Arena.

He also mentioned, "We are first a community before we are competitors."

Fr. Jett added, "Ipinagdiriwang natin ang isa't-isa. We see our rival and we say thank you because you make me not just better athlete, but a better person."

The opening ceremony started off with Ateneo Glee Club's rendition of Teach Me To Be Generous and the Lupang Hinirang.

Athletes who have played and will represent the country to different international tournaments such as the upcoming SEA Games this 2019 were recognized before the taking of oath of sportsmanship.

As last year's Oath of Sportsmanship was led by Golden State Warrior Stephen Curry, this season, it was led by Ateneo fencer and World Cup bronze medalist Maxine Esteban.

After the oath taking, The Itchyworms and Sponge Cola sang the UAAP Season 82 theme song.

Aside from these two bands, UAAP also featured local bands such as Autotelic, December Avenue and IV of Spades.

The UAAP games will start on Wednesday, September 4, with Men's and Women's basketball at the Smart Araneta Coliseum and the UST’s Quadricentennial Pavillion respectively.