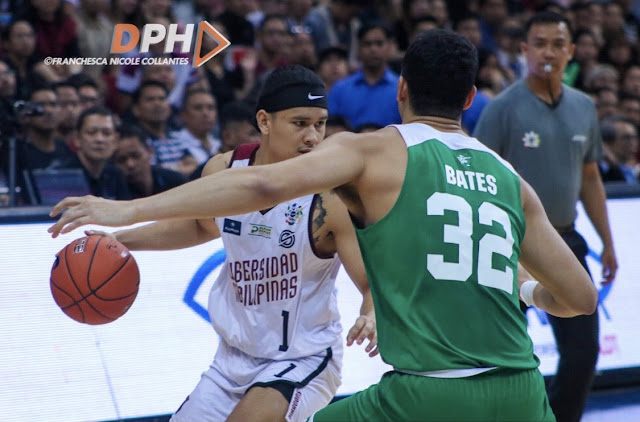 PASAY CITY - UP fights back and improved their winning streak as they beat the De La Salle Green Archers with Juan Gomez de Liaño's clutched three-point shot that led to UP's win, 72-71, Wednesday evening at the Mall of Asia Arena.

Kobe Paras led the Fighting Maroons with 21 points, two steals and two blocks. Bright Akhuetie also had his double-double at this game with 17 points and 14 rebounds. Juan Gomez de Liaño chipped in 10 points and his clutch three-point basket that led to the Maroons win.

Andrei Caracut and Aljun Melecio both chipped in 16 points for the Green Archers but still fell short to gain a win.

UP will next face the Ateneo Blue Eagles as the rematch of UAAP S81 finals and the much awaited Battle of Katipunan on Sunday, September 29, 4:00 p.m., at the Smart Araneta Coliseum while La Salle will try to bounceback against the UST Growling Tigers on Saturday, September 28, 2:00 p.m., at the Mall of Asia Arena.