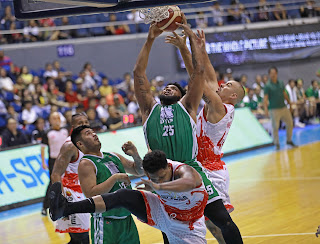 Quezon City - Columbian Dyip powered through an escape to against the Phoenix Pulse Fuel Masters to stay in the running for the playoff spot of the PBA Governor's Cup, 106-104, Friday night at the Smart-Araneta Coliseum.

While Columbian dominated the game from the first quarter up until the second quarter, Phoenix Pulse woke up in the second half, showing that they can go head to head against their opponent.

From a lead that is as high as 13 points; 60-47, the Fuel Masters were able to chase the trail down to 4 points through the effort of Michael Gamboa who scored back to back baskets to tally in a 67-63 score with over 3 minutes left in the quarter.

Gamboa's back to back baskets prompted the Fuel Masters to be more aggressive on their defense and limit the Dyip from scoring.

Phoenix Pulse's debuting import, Alonzo Gee figured in an 8-point scoring spree in order for the Fuel Masters to snatch the lead away from the Dyip, 69-73 with over a minute left in the game. Third quarter sealed off with Phoenix ahead by 2; 74-76.

The fourth quarter had been a tale of chase for both teams as Phoenix and Columbian exchanged basket after basket until Rashawn McCarthy shoots a jumper to hand the lead over to the Dyip, 84-83.

Columbian lead as much as 7 points, 92-85 off CJ Perez's basket but the Fuel Masters were able to chase the lead down to 2; 92-90 as Alex Mallari scores a triple.

With over a minute left in the game, Khapri Alston's jump shot gave the Dyip a 10 point lead, 104-94 but the Fuel Masters went on for a 3-0 run through the efforts of Gee, Mallari and RJ Jazul. McCarthy was able to recover a 6-point advantage for Columbian after he scored 2 out of 2 from the free throw line but Phoenix ignited a late rally to further trim the lead down in the dying minuted of the ball game.

Jazul sank 1 out of 2 from the free throw line from a foul given up by McCarthy while Gee closed the game with his triple to tally the final score at 106-104.

Gee on the other hand tallied his baptism of fire in the PBA with 45 points, 9 rebounds, 1 assist, 6 steals and 2 blocks.