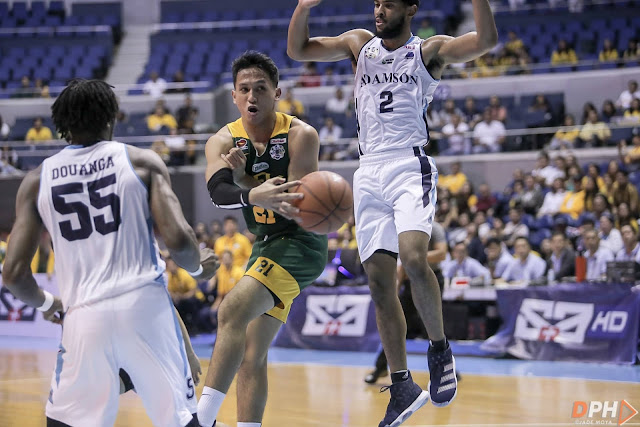 
The Tamaraws outlasted a fourth quarter surge of the Soaring Falcons to claim win number 7 in 13 games to tie with La Salle and eliminated Adamson from the final four race.
The Soaring Falcons had the chance to bring the game to overtime as they were within three but a missed triple bid their final four chances goodbye.
The duo of Wendell Comboy and Ljay Gonzales top scored for the green and gold with 11 points apiece followed by Ken Tuffin and Rey Bienes with 11 and 6 points respectively.
Jerrick Ahanmisi was limited to only 10 points and missed all of his 7 triples. Lenda Douanga and Aaron Fermin also scored 10 points each for the San Marcelino based squad in a losing cause.


FEU will close out their elimination round in a rematch of the Battle of the East against UE at Ynares Antipolo on Sunday, October 27. Adamson's next match up is against the UST Growling Tigers on Saturday, October 26 also at the Ynares Center in Antipolo.