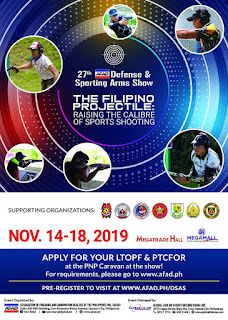 MANILA—Gun owners and gun enthusiasts are expected to flock the SM Megamall Megatrade Hall in Mandaluyong in the second leg of the 27th Association of Firearms and Ammunition Dealers of the Philippines Defense and Sporting Arms Show from Nov. 14-18.

At least 61 member exhibitors will flaunt their best line of firearms, ammunition, and paraphernalia for the gun enthusiasts to check out in the said event, the follow-up to the successful first part last July.

Aside from that, the PNP will put up a satellite gun license application there for new gun owners.

"The PNP together with AFAD is providing an LTOPF (License To Own and Possess Firearm) caravan to help gun owners process their gun license application and renewal, so our visitors have the luxury of faster processing for their gun licensing needs," said Aric Topacio, the president of AFAD.

Senators Bato Dela Rosa and Migz Zubiri are among the special guests that are expected in the said event with the theme "The Filipino Projectile: Raising the Caliber of Sports Shooting".

The national shooting team for the Southeast Asian Games, which is being supported by AFAD as well, is also expected to grace organization's gun show.