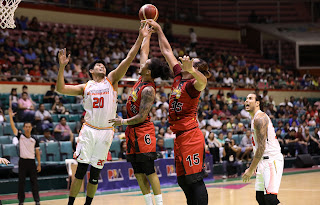 Jervy Cruz exploded at the right time for the NorthPort Batang Pier as he featured in defeating the San Miguel Beermen, Wednesday night. Photo courtesy of the PBA Media Group

Pasay City - The NorthPort Batang Pier reinforced in a perfect timing and immediately tested the waters against the mighty San Miguel Beermen, handing them over a 119-127 defeat, Wednesday night at the Cuneta Astrodome.

2 players debuted donning their Batang Pier jersey - Michael Qualls who replaced Mychal Ammons as the team's import and Christian Standhardinger who played his first game after he was traded off by the Beermen in favour of Moala Tautuaa.

From being down 8-0 as San Miguel started the game as feisty as they are, NorthPort slowly worked their way to catch up on the kind of game that their opponent wanted to play.

Kevin Ferrer scored a triple that cuts their trail to just a point, 14-13. Qualls scored 5 straight points to hand the lead over to the Batang Pier, 14-18 before Dez Wells scored back to back to tie the game at 18-all.

Outside shots and free throws made its wonders for NorthPort that they were able to seal off the quarter with a 7-point lead; 29-36.

The Batang Pier began leading in double figures in the second quarter as their shots from beyond the arc kept connecting. Ironically, each time the Beermen comes as close as a 3-point trail, NorthPort's 3-point shooting would sink in to double their lead.

San Miguel trailed as much as 13 points in the quarter but they managed to close the first half with yet another 7-point trail, 57-64 through the efforts of Wells completing a 3-point play and Von Pessumal's clock-beating 3-pointer.

At the resumption of the game from the halftime break, NorthPort opened the 3rd quarter with a 3-0 run, extending their lead to 14; 57-71.

June Mar Fajardo and Wells teamed up to trim the Batang Pier's lead to just 5 points, 70-75 only to find themselves trailing again by 8 points; 70-78, from Qualls's 3-point jump shot.

Terrence Romeo was able to trim their trail to just 2 points as he sank a triple, 86-88, but Russel Escoto was able to sink a triple of his own to bring NorthPort's advantage back to 5; 86-91.

The 3rd quarter ended with the Batang Pier still ahead of the Beermen; 91-94, after Wells made a buzzer-beating triple.

From there, the Beermen and the Batang Pier exchanged basket after basket after basket, with NorthPort hanging on to their advantage. However, at the 8:06 mark of the game, Wells gave up a hard foul on Robert Bolick that injured the rookie.

Bolick had to be taken to the bench aided by his teammates and took a while before he was able to stand up to take the free throw he earned from Wells's foul. Bolick splits his charities, giving the Batang Pier a 7-point lead, 95-102.

Team Manager Bonnie Tan also added that Bolick will undergo MRI to assess the injury but also mentioned that the NorthPort rookie can walk in his own strength.

Jervy Cruz sank crucial free throws for NorthPort in the 4th quarter, all paving way to safeguard their lead off the threats loomed by the Beermen to take the win against them.

Cruz used the "Thomasian connection" he had with Ferrer to allow the Batang Pier to hang on to a 2-point lead, 113-115.

Wells did not want to just call it a night for the Beermen as he tied the ball game at 117-all with 2:30 left to play in the game. But NorthPort did not allow the game to slip out of their hands as Qualls won over in breaking the tie, giving the Batang Pier the lead, 117-119.

Nico Elorde closed the curtains of the game by scoring a triple that tallied the final score of 119-127.

"Para sa mga players to because they worked hard to get the win tapos yung pagpalit namin ng import timing din. This is also for the management and for the fans na medyo na-disappoint sa amin last conference because we fell short at the same team na tinalo namin ngayon. Blessing itong panalo na ito, at least may bwelo kami going to the next game," Coach Pido Jarencio said.