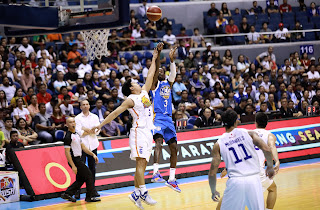 Manny Harris teamed up with Kiefer Ravena to put up a stellar performance for the Road Warriors to give an upset on the KaTropa. Photo courtesy of the PBA Media Group.

Quezon City - NLEX Road Warriors came to the Smart-Araneta Coliseum on a Friday night prepared and well-equipped with the right firepower to upset the TnT KaTropa, 126-113.

Manny Harris was just an assist shy from finishing the game with a double-double, earning 40 points, 6 rebounds, 9 assists and 7 steals.

"It did not matter much that our big men had been in early foul trouble as we wanted to delay the match up between Manny [Harris] and [KJ] McDaniels pero hindi na namin naiwasan nung bandang huli kasi maganda yung tapatan nilang dalawa," Coach Yeng Guiao mentioned.

Guiao lauded the performance of his team tonight, saying that their preparation coming into this game paid off as the Road Warriors walked away with the win.

Failure to convert most of the free throws given to them had been one of the downfall of the KaTropa in the game, with McDaniels scoring only 6 points out of 12 tries at the line while Troy Rosario could not convert a point out of 4 tries from the free throw area.

Beyond the missed chances, TnT also missed the services of Jayson Castro almost the entire game as the TnT captain had to be taken to the hospital for MRI after sustaining an ankle injury halfway through the first quarter.

Castro's absence in the game had been a factor that the Road Warriors had taken advantage of and allowed them to lead by as much as 18 points, 100-82, with over 10 minutes to play in the 4th period.