Phoenix back in winning form, dumps Rain or Shine

Phoenix back in winning form, dumps Rain or Shine 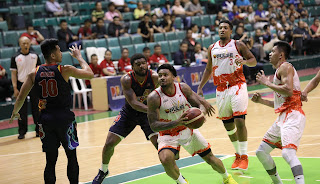 Eugene Phelps proves why he is the league's second top scorer as he lead the Phoenix Fuel Masters to their second win of the conference at the expense of the Rain or Shine Elasto Painters. Photo courtesy of the PBA Media Group.

Pasay City - Phoenix Pulse Fuel Masters goes back at the winning form after dealing with a highly physical encounter with the Rain or Shine Elasto Painters; 86-84, Wednesday night at the Cuneta Astrodome.

The Fuel Masters went out of the hardwood with the determination to win against the Elasto Painters, owning the first quarter after a handful of deadlocks, 18-26.

In an unexpected turn of events with just 10:48 unto the second quarter, Rain or Shine lost Beau Belga to a Flagrant Foul Penalty 2 as he got caught giving an intentional elbow at Jason Perkins. Perkins was also called for a technical foul for second motion.

Phoenix took advantage of Belga's ejection from the game to dominate Rain or Shine and lead by as much as 11 points; 23-34.

But the determined Elasto Painters stayed alive regardless of the huge blow in their team, chased the lead down and closed the second quarter with a 7-point trail at halftime; 43-50.

At the resumption of play, Rain or Shine surged and managed to tie the ball game at 55-all through a three pointer by Kayel Locke with 6:56 in the clock.

Jorey Napoles, however, was able to recover and break the tie with a counter-attack, giving the lead back to the Fuel Masters; 55-58.

The Fuel Masters tried to sail further in the game but the Elasto Painters kept looming around, preventing them to lead by double digits. The third quarter closed down with Phoenix ahead by 3; 69-72 after RJ Jazul scored a floating jumper to beat the game clock.

It was a dog-fight as the game reached its final quarter with Rain or Shine being able to tie the game at 80-all off Javee Mocon's driving lay-up with over 7 minutes left to play.

Mocon replicated the tie with 17 seconds at the clock with his jump shot; 84-all with the thought that the game can go into overtime.

It seemed as if it was a deja vu for the Elasto Painters that they were able to tie the game as the clock winds down only to lose in the end game as RR Garcia scored the clutch basket to beat the buzzer and hand the win to the Fuel Masters.

Phoenix's Wednesday night victory is their gift for their Head Coach, Louie Alas who will be celebrating his 53rd birthday on Thursday; 10th of October.

The Fuel Masters improved on their slate with 2 wins and 4 losses while the Elasto Painters slides down to a win and 4 losses.