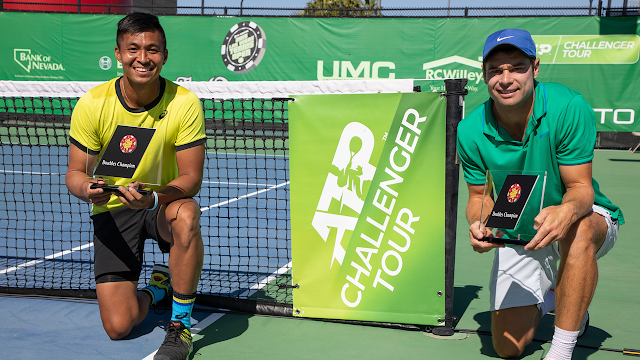 MANILA--Filipino tennis player Ruben Gonzales has finally found a way to get out of his season struggles one month before the 30th Southeast Asian Games as he and South African partner Ruan Roelofse defeated Americans Max Schnur and Nathan Pasha to claim the doubles title at the Las Vegas Tennis Open doubles title at the Frank and Vicki Fertitta Tennis Complex inside UNLV last Sunday.

Gonzales, who has been trying to reach the peak of his game which helped him achieve his career-high singles ranking of world number 131 in September last year, undoubtedly showed his form in the six-day event co-associated with the Andre Agassi Foundation when they clinched the hard-fought 2-6, 6-3, 10-8 win en route to the title.

Gonzales and Roelofse first paired up at the ITF USA F39 event earlier this month, where they almost immediately meshed with each other, reaching the semifinals as the top seeds.

Prior to last week, the duo also reached the final in Claremont where they were stunned by the German pair of Milen Ianakiev and Hendrik Jebens.

With the title, Gonzales now moved 30 spots higher to number 204 in the live ATP doubles rankings and will have the chance to get inside the Top 200 before the season ends depending on his results at the Traralgon Challengers where he will be forming a partnership with Aleksandar Vukic starting on Wednesday.