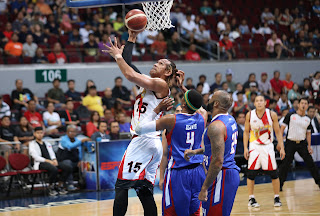 June Mar Fajardo had been one of the heroes for the San Miguel Beermen as they defeated Magnolia Hotshots. Photo courtesy of the PBA Media Group.

Pasay City - It was a weekend of heartbreak as the San Miguel Beermen narrowly escaped the Magnolia Hotshots, 89-90 at the Mall of Asia Arena.

The Beermen went off to a good start as Dez Wells scored a triple to kick off the intense battle against the Hotshots but Rome dela Rosa scored off a jumpshot after three offensive rebounds - two of which are from his own misses, to cut the trail to just a point; 2-3.

After exchanging leads in the early get go of the quarter, the Beermen established their lead as Alex Cabagnot scored a jump shot to hand over a 3-point lead; 15-18. From there, San Miguel lead by as much as 6 points; 17-23.

The resilient Magnolia were able to catch-up and trimmed the advantage down to 2 points; 21-23 off a basket scored by Ian Sangalang.

Arwin Santos scored back to back triples to eventually seal off the first quarter with a 10-point advantage, 21-31.

Magnolia surged at the second quarter as outside shots worked wonders for them. Justin Melton opened the outside scoring for the Hotshots and was followed later on by Paul Lee's back to back triples to tie the ball game at 39-all.

The Beermen were able to break the tie only to find themselves engaged in another exchange of baskets with the Hotshots that resulted to another round of deadlocks.

At halftime, the Hotshots were only trailing by 2 points; 46-48.

Wells opened up the scoring in the second half with a basket from an offensive rebound off his own missed shot, 46-50.

Dela Rosa stood at the perfect spot to sink a triple in, cutting the Hotshots's trail to a point; 49-50 on which Romeo Travis was able to take advantage of as he later on scored to hand the lead over to Magnolia, 51-50.

A technical foul called against Kelly Nabong lead to the Hotshots's break as Lee makes it a 6-point lead from converting a point from the technical free throw; 56-50.

Playing good defense and proving why they are the Governor's Cup defending champions, Magnolia lead by as much as 10points; 61-51 only to find themselves in a deadlock at 70-all after Von Pessumal scored a corner triple with 1:16 left to play in the quarter.

Both teams remained inseparable at the end of the third, scoring 72 points.

Travis broke the tie as the 4th quarter kicked off, giving the lead to the Hotshots; 74-72 until Cabagnot hit a triple to give the 1-point edge to the Beermen; 74-75.

After an intense round of exchange of leads and baskets, Magnolia suffered a huge blow as Travis sustained an injury with 4:44 left to play in the game.

Travis had to be carried out by his teammates to the bench as he find it difficult to walk by himself and was forced to sit out in the entire game.

The Hotshots remained resilient against the Beermen regardless of the fact that they were forced to play All-Filipino due to Travis's injury. Magnolia kept the game at close range until the final buzzer.

Despite the injury, Travis finished the game off with 31 points.

Wells lead the scoring for the Beermen with 33 points.