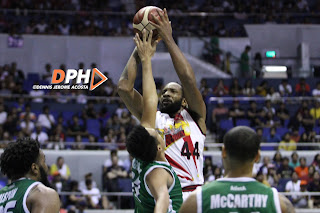 Dez Wells survived a highly physical game against the Columbian Dyip, to lead the San Miguel Beermen to victory, 107-113, Sunday night at the Smart-Araneta Coliseum. Photo by Dennis Jerome Acosta.

Quezon City - The San Miguel Beermen had to go through the eye of the needle to escape the vicious Columbian Dyip, 107-113 at the Smart-Araneta Coliseum, Sunday night.

Dez Wells finished off with 39 points, 9 rebounds and 5 assists to lead the Beermen to their 5th victory in the PBA Governor's Cup.

The 4th quarter is all that the Beermen needed in order to walk away with the win against the Dyip. Columbian kept looming around San Miguel the entire game, threatening the Beermen to hand them over their second loss in the conference.

But a massive 3-point shot made by Arwind Santos with only 4:02 minutes left in the game turned things around for San Miguel and paved way for them to pull through the tough defense of Columbian.

The Beermen were also able to take advatange of the Flagrant Foul Penalty 1 called on Jackson Corpuz after fouling Wells with 3:09  left to play. Corpuz was unable to come back into the game after he was asked to sit down the bench off the said infraction.

"They [Beermen] wanted to beat Columbian right away but it's a process, I told them to just control their emotions. In the second half, we were able to realize that we are not playing our game," says Coach Leo Isaac at the post game press conference.

The game also served as the debut for the newest Beermen, Mo Tautuaa who came off the trade with the NorthPort Batang Pier in place of Christian Standhardinger.

"[Mo] played really well in his first outing as part of the Beermen. Definitely, he will help us in our quest in winning a lot of championship. He's a perfect reliever for June Mar [Fajardo] and he could also perform well with June Mar. Hindi pa nakikita yung combination nung dalawa but in the future, we will do that," Austria said when asked about the performance of Tautuaa.

San Miguel improved to 5 wins and 1 loss and is comfortably at the second place in the standings after the victory against Columbian.

Khapri Alston finished off with 38 points for the Dyip despite bowing to the Beermen.