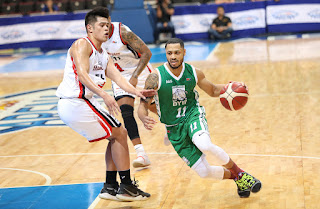 Pasay City - Columbian Dyip moves a notch closer to their playoffs bid as they won against the Blackwater Elite, 102-90, Friday night at the Mall of Asia Arena.

The Dyip depended on the sweet shooting Rashawn McCarthy who lead them to the victory, finishing off with 25 points.

Outside shooting had been Columbian's weapon against Blackwater as McCarthy shot 7 out of 13 from the area. McCarthy was not the only one with the hot hands from beyond the arc as Reden Celda also contributed 2 out of 3 attempts and CJ Perez sinking 2 out of 6.

Aaron Fuller combined forces with Ray Parks to keep Blackwater alive in the ball game but the Dyip remains sturdy at the driver's seat at halftime, 42-49.

At the resumption of play from the halftime break, Columbian was called for a technical for fielding only 4 players that sent Parks at the line and but failed to score a point.

Columbian's defense became rock solid despite Blackwater's attempts in scoring the basket. Proof of the hard defense by the Dyip was at the 4:49 mark of the third quarter when Perez succeeded on a steal and no one from the side of the Elites dared to defend, allowing Perez to easily complete the fastbreak with a dunk and giving a 9-point advantage; 68-59.

The final quarter started out on the wrong footing for the Dyip as Cahilig was found guilty of a foul, sending Chris Javier at the free throw line.

Javier splits his charities and trims the lead to 9; 68-77. This time around, Mike Cortez found an opening in the Columbian defense and succeeded in a steal to score an easy 2 points to further cut the lead down to 7; 70-77.

The 3 easy points made by the Elites alarmed the Dyip that they have immediately call for a timeout to set their counter attack.

Celda brought the lead back to 10; 80-70 at the return of play as he scored a triple, Juami Tiongson also scored from the outside to record a 13-point advantage for the Dyip; 83-70.

"Our team played good defense and the outside shots worked for us tonight," says Rashawn McCarthy who was named as the best player of the game.