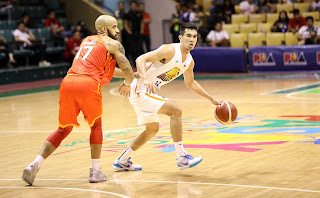 Troy Rosario lead the TnT KaTropa to their 5th straight victory of the conference with the NorthPort Batang Pier becoming their latest prey. Photo courtesy of the PBA Media Group.

Pasay City - TnT KaTropa remains at the top of the standings, extending their winning streak to 5 after defeating NorthPort Batang Pier; 103-100 at the Cuneta Astrodome, Wednesday night.

Troy Rosario stood out for TnT when it mattered the most, scoring the clutch triple that handed them over the 1-point edge over NorthPort in the dying minutes of the 4th quarter.

Rosario also converted 2 points from the free throw line to tally in the final score.

KaTropa owned the first half of the game but the Batang Pier bounced back at the beginning of the second half with Garvo Lanete making a statement that he can launch a comeback for his team through his efforts.

Lanete scored 5 straight points for NorthPort that handed them over the lead; 59-56.

Despite the efforts of the KaTropa to reclaim the lead, NorthPort would come up with counter attacks that lead them to own the 3rd Quarter; 70-65.

NorthPort's run continued on in the final quarter as Sean Anthony scored the first basket, extending the advantage to 7 points; 72-65.

Lanete and Rosario went on to put up a show to the delight of both the Batang Pier and KaTropa fans as they exchanged basket after basket that resulted to an 89-86 score, in favor of NorthPort.

At the last 2 minutes of the game, TnT and NorthPort were again on exchange of leads which ended up with Jayson Castro giving the edge to the KaTropa after he scored a triple; 97-98.

But Kevin Ferrer stood at the right place at the right time, scoring a counter triple to hand the lead back to NorthPort, 100-98.

For Coach Bong Ravena, it is the breaks of the game that lead the KaTropa to victory and also giving the Batang Pier credits of putting up a good fight against them.

"It was tough for us. We need improvement on our defense especially on the latter part of the game. We should continue working hard, especially on defense. Breaks of the game, but another escape for us, tougher teams coming up ahead," Ravena said in the post game interview.

Rosario finished the game off earning 22 points and 2 out of 7 in the three point area.

As the KaTropa improves to 5 wins on record, the Batang Pier is on the verge of having an early break as they slide down to a win and 5 losses.