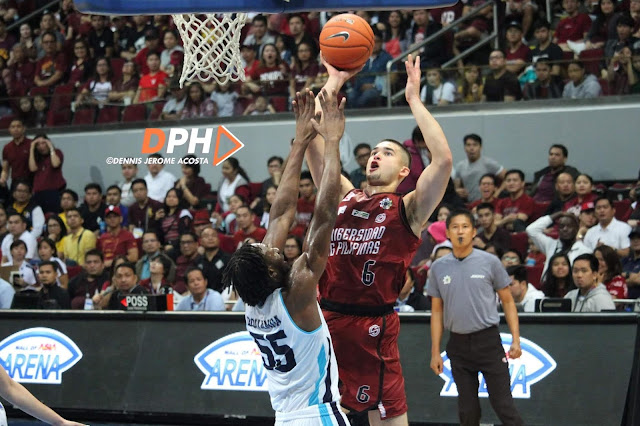 QUEZON CITY - The UP Fighting Maroons enters the final four after beating the NU Bulldogs, 80-77, Wednesday morning at the Smart Araneta Coliseum.

With 10 seconds left in the match, the National University Bulldogs had a chance to bring the game to overtime as they were just trailing by three points.

Shaun Ildefonso's shot from beyond the arc bounced of the rim of the ring which resulted to another heartbreak loss for the boys from Sampaloc.

The Fighting Maroons displayed balanced offense as four players scored in double digits led by Kobe Paras and Bright Akhuetie with 19 and 16 points respectively. Jun Manzo proved clutch once again with his crucial free throws in the dying seconds of the match to keep his squad separated from a hungry Bulldogs team.

Dave Ildefonso's hot shooting continues as he top scored for NU once again with 24 points coupled with 6 rebounds, 6 dimes, and 3 steals. JV Gallego had himself a career game with 20 points, 5 boards, and 3 assists.

With this win, the Maroons improve their score card to second with 8-4 while the Bulldogs go down to 2-11.