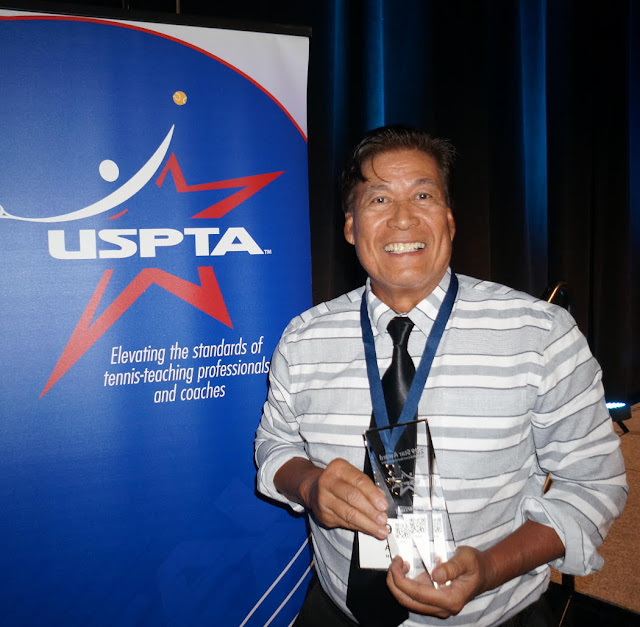 Marcial, who currently resides at West Covina in California, was given with the Star Coach Award with his consistent act "in promoting the game of tennis in the United States and Worldwide", most notably through his non-profit group Friends of Philippine Tennis (FOPT).

The USPTA Star Award is presented annually to members who have dedicated many years to volunteering in grassroots tennis initiatives that incorporate multiculturalism and promote tennis and sportsmanship to the players they touch.

In an interview with Dugout Philippines, Marcial said, "The USPTA supports the mission, goals and values of FOPT--to give back to the community and to propagate the sport of tennis! It means that the program is valued and my satisfaction and productivity rises that motivates me to maintain and improve the good cause! This award is so essential to an outstanding  environment because the project is valued and respected.

"I felt a sense of achievement for a good caused well executed or even for a valiant effort to continue FOPT's advoacy. With the support of my tennis friends, who trusted and respected me, I think the journey would be realized."

Marcial founded FOPT in 2012 in the light of helping young and aspriring tennis players who cannot afford to buy tennis equipment by donating used ennis equipment, including racquets, shoes, balls and nets which the group collects.

In his time, Marcial was the Philippines' number one tennis player in both singles and doubles, having won a SEA Games gold for the country in 1981 alongside Rodolfo Ody Gabriel in the men's doubles as well as with Pia Tamayo in the mixed doubles event.

As a professional, Marcial had several Top 100 wins in the ATP and played for the Philippines in over 100 international ties.

He is currently a certified tennis coach in the US and a member of the USPTA, the largest tennis coaches association in the United States founded in 1927.