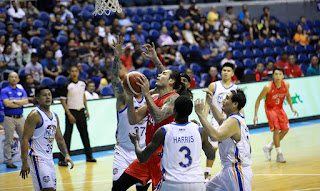 Christian Standhardinger leads the Batang Pier to their 4th win in the Conference at the expense of the Road Warriors. Photo courtesy of PBA Media Group.

Manila - NorthPort Batang Pier broke the winning streak of the NLEX Road Warriors and handed them their second defeat of the conference, 102-94, Wednesday night at the Smart-Araneta Coliseum.

Christian Standhardinger and Michael Qualls once again joined forces to give the Road Warriors an upset, finishing off with 23 and 36 points, respectively.

Team Captain Sean Anthony also stepped up and scored 19 points, whose split free throw turned out as the last play for the Batang Pier towards the final buzzer. Anthony connected 3 out of 8 attempts on the 3-point area and sank shots when it mattered the most for NorthPort.

NorthPort only needed the last 4 minutes of the 3rd quarter to begin their comeback in the game after trailing by as much as 9 points, 52-61. The Batang Pier slowly crawled their way to tie the game at 70-all with Anthony's driving layup.

The Batang Pier sealed the 3rd quarter by outscoring the Road Warriors, 38-27 to tally in an 81-78 score.

Qualls scored 9 straight points that allowed NorthPort to go ahead of NLEX by double digits, 100-87 with 1:26 left to play in the quarter. Despite the efforts of Kiefer Ravena and Jericho Cruz to score for the Road Warriors, they were  not able to recover as Anthony's two split free throws off back to back fouls coming from Cruz allowed the Batang Pier to go further.

Manny Harris lead the scoring for the Road Warriors, finishing off with 36 points while Ravena and JR Quinahan chipped in 16 and 10 points, respectively.

NorthPort improves to 4 wins and 6 losses while NLEX remains atop the standings with 8 wins and 2 losses.