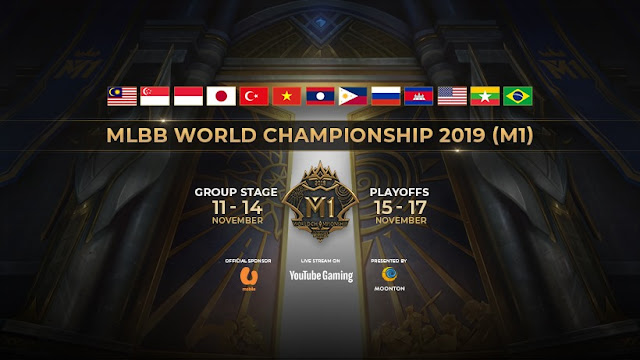 MANILA -- Two all-Filipino teams will square off with the best around the world for the chance of being crowned as the best in Mobile Legends: Bang Bang (MLBB).

Sunsparks and Onic PH will banner the Filipino ML community on the MLBB World Championship (M1) 2019 at the Axiata Arena in Kuala Lumpur, Malaysia.

The two teams earned the right to participate in the tournament after being the finalists of the 2019 MLBB Professional League - Philippines (MPL-Philippines) last Oct. 6, with Sunsparks eventually crowned as champions.

All 16 teams, which are drafted into four groups, will face their group mates in a best-of-three, round-robin format.

The top teams from each of the four groups will go to the upper bracket while the second-best teams will be drafted to the lower bracket to form the M1 2019's Main Event from Nov.15-17.

The champions will get US$80,000, or more than P4 million, and the right to be called the best MLBB team in the world, while the rest of the contenders will share the rest of the tournament prize pool of US$250,000 (more than P12.5 million).

M1 2019 will be open to the public on the Main Event, with tickets available at the tournament's official website.

All games will be also streamed live via MLBB's YouTube Gaming channel.