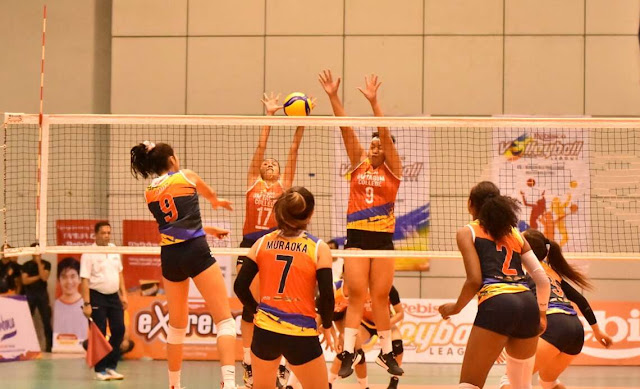 It’s Rebisco Volleyball League National Finals time once again! The top girls' volleyball teams from around the country and four foreign guest teams compete to determine the best. That said, five teams are off to a good start in this week-long tournament.

The guest squad from Thailand broke the RVL 2019 ice by imposing their will over the Central Visayas champions University of San Jose Recoletos. The Thais blasted their way to an 8-2 advantage before the first technical timeout, and their lead grew to 16-7 by the second TTO of the opening frame. A kill block brought 3BB Nakornnont to set point, and an attack by Donphon Sinpho ended the first set at 25-13.

From a 3-3 tie, Coach Thanakit Inleang’s troops initiated a 5-0 run and never looked back. Their lead grew to as high as seven points, 12-5, but USJR came to within three, 23-20. A soft tip by Sirikanda Wongsopha gave the Thais match point while Wimonrat Thanapan ended the frame and the match at 25-20. Sinpho and Aonanong Saisri led 3BB Nakornnont with eight points each. Louneth Marie Abangan led USJR with seven markers.

The Western Visayas champions must have been inspired by 3BB’s performance that they followed the script against the Northern Mindanao titlists Iligan City National High School. Alyssa Bertolano’s six aces in set one helped the Thunderbolts establish a 16-4 advantage. The margin grew to 14 points, 20-6, and a service error by Althea Carbahal gave Tay Tung the set, 25-14.

Set two was a repeat of the first as Tay Tung mounted a 16-7 advantage en route to their first victory in the RVL 2019 National Finals. A missed hit on ICS gave Tay Tung set point and Rhean Almendralejo’s quick strike off an over reception ended the contest at 25-9. Bertolano led BTT with 10 points while Kylie Ann Lacio paced ICS with four.

In a contest between two Luzon regional champions, the National Capital Region champions stamped their dominance against their Northern Luzon Counterparts. The first and second sets ended at 25-8 and 25-15, respectively, for the UAAP Season 82 girls volleyball runner-up. Kate Santiago, May Ann Nuique, and Aprylle Tagsip led the Lady Falcons to victory number one.

In the first three-setter of the Rebisco Volleyball League 2019 National Finals, the ladies from Hawaii outlasted the Southern Mindanao champions University of Mindanao Tagum College in three sets. All sets had a 25-23 scoreline with sets one and three going to the Americans. The Hawaiians had a 24-20 edge in the first set but UMTC scored three straight points to trim the deficit to one. Unfortunately, a double contact violation gave the set to Team Aloha.

The ladies from Davao del Norte bounced back in set two by scoring two straight points from a 23-23 tie. Team Hawaii started strong in the third set with an 8-4 edge. However, UMTC fought back by slashing the margin to two, 13-11, before tying the count at 18. Both teams fought until a 23-23 deadlock until Gennezia Hawkins, the only player left from last year’s silver medal squad, connected on two straight attacks to seal the victory for Team Aloha Region.