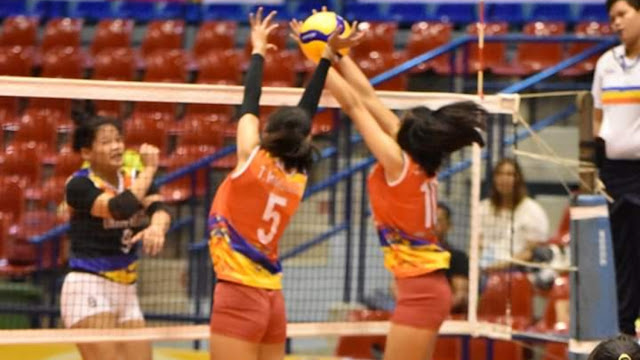 It was supposed to be a marquee match-up during the ongoing Rebisco Volleyball League 2019 National Finals at the Ynares Sports Arena in Pasig City. Adamson University, the National Capital Region champions and UAAP Season 82 Girls Volleyball runner-up, will test the mettle of 3BB Nakornnont Wittaya 6 Sports School of Nonthaburi, Thailand.


Instead, it turned into a one-sided affair as the Thais solidified their supremacy over the competition by dominating the Lady Falcons in straight sets. The first frame was a no contest as 3BB's punishing attacks and devastating serves engineered a 25-7 demolition. The second set turned out to be better for Adamson but they still lost, 25-19. Coach Thanakit Inleang's troops remain undefeated in the tournament while the San Marcelino-based squad suffered its first defeat.


In the first game of Day 4, Bacolod Tay Tung also kept their unblemished record by defeating the Southern Mindanao Champions University of Mindanao Tagum College in two sets, 25-20 and 25-16.


Following that match is a pulsating three-setter between the Central Visayas champs University of San Jose Recoletos and Northern Luzon titlists First City Providential College. The competitors from Bulacan drew first blood, 25-23, but the Cebuanos forced a decider, 25-22. The teams fought to an extended set three before USJR emerged victorious, 26-24.


That thrilling encounter must have inspired Team Aloha Region of Hawaii and Team Sibu of Sarawak to follow the script as the Malaysians clinched set one, 26-24. However, the Hawaiians claimed the second set, 25-22, and came from behind to keep their undefeated record in three sets, 25-23.