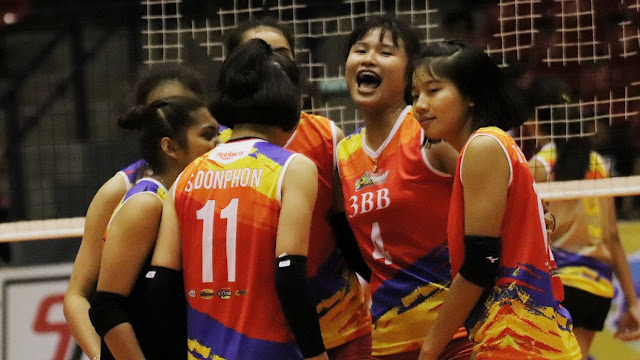 
The squad from Negros Occidental edged Team Sibu in two sets but had difficulty clinching the opening frame as the Malaysians forced a deuce. However, Coach Ian Macariola's crew scored the next two points to close the tally at 26-24. Tay Tung finished the deal with a 25-19 count in set two.


Meanwhile, 3BB Nakornnont Wittaya 6 Sports School is in a league of its own after dominating the Northern Luzon champions First City Providential College in two sets wherein the Bulacan-based squad tallied just nine points in each set. The victory gave 3BB its fifth straight win while FCPC dropped to 0-4.


In the third match of a five-game billing, Central Visayas titlists University of San Jose Recoletos tallied its third win against Team Australia, 25-18 and 25-22. The guest squad from the Land Down Under is yet to score a victory after four matches.


The second to the last match pitted Eastern Visayas champs Leyte National High School and their Southern Mindanao counterpart University of Mindanao Tagum College. In the end, the competitors from Davao del Norte took the victory in straight sets, 25-19 and 25-20. UMTC improved to 2-2 while Leyte National fell to 0-3.