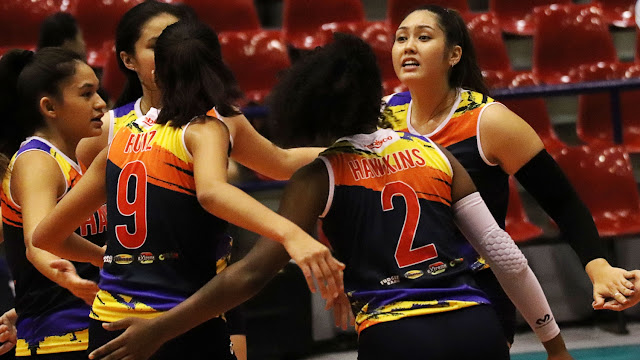 In a match that will determine the top spot on Pool B of the Rebisco Volleyball League 2019 National Finals, Team Aloha Region HP of Hawaii outclassed Western Visayas champions Bacolod Tay Tung High School in two sets, 25-21 and 25-17. The Hawaiians finished the preliminary round undefeated after five matches. Meanwhile, Tay Tung gets the second spot despite getting their first loss.


In the third match, 3BB Nakornnont continues its undefeated run by dominating California Academy, 25-14 and 25-17. Finally, the University of San Jose Recoletos finished the preliminaries at 4-2 by winning over St. Alexius College, 25-11 and 25-21.


Meanwhile, Iligan City National High School will try to get their first win in the RVL 2019 Nationals against University of Mindanao Tagum College in the second game. Likewise, 3BB Nakornnont aims to continue its undefeated run against Team Australia in the third match. Eastern Visayas champs Leyte National High School and Team Sibu will square off in the second to the last preliminary match.


Finally, Adamson University and California Academy will contest for the last semifinal slot of the RVL 2019 National Finals.