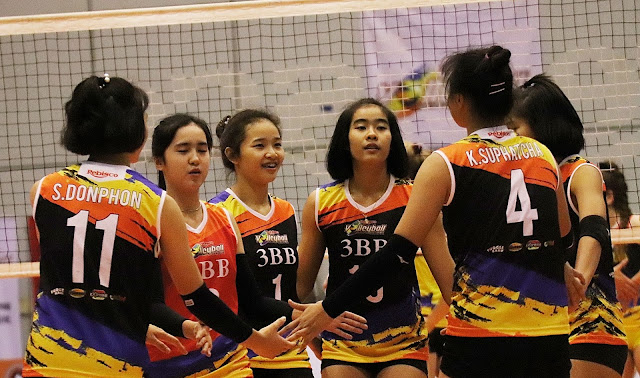 For a while, 3BB Nakornnont's dominance in the Rebisco Volleyball League 2019 National Finals met a roadblock at the hands of Bacolod Tay Tung High School. In the end, the squad from Nonthaburi continued their unblemished run en route to the gold medal match.


The first set features runs from both squads as Tay Tung established an 8-5 advantage in the first set. However, the visitors levelled the count at nine apiece. The Central Visayas regional champions built a 15-10 advantage, only to be erased by the Thais with a 6-0 run to take the lead.


The second set was smooth sailing for the visitors as they stretched an 8-3 advantage to a 16-7 rout. The Thais booked their ticket to the gold medal match by taking set two, 25-10. Meanwhile, Bacolod Tay Tung will play in the bronze medal match for the second straight year. They clinched third place in last year's RVL Nationals against Holy Rosary College.