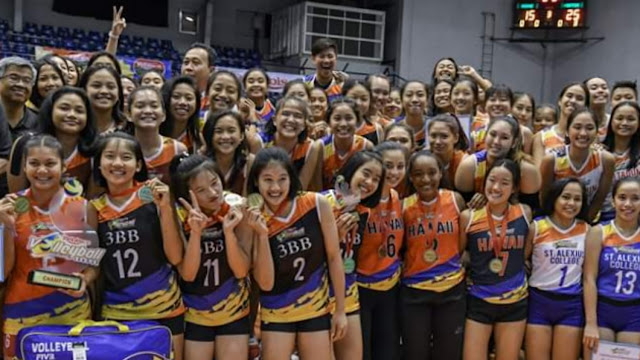 It's fascinating to see parallels between the Rebisco Volleyball League 2019 National Finals gold medal match and the recently-concluded women's volleyball encounter between Thailand and the Philippines in the 30th Southeast Asian Games.


Meanwhile, the Philippines had the best 18-and-Under teams out of the 650 schools that participated in nine regions around the country. That's much like the best Filipino volleyball players representing the nation for the SEA Games like Jia Morado, Maddie Madayag, and Alyssa Valdez.


The game flow had similarities as well. Bacolod Tay Tung High School gave everything 3BB Nakornnont can handle in the opening set of their semifinal match. Likewise, National Capital Region Champions Adamson University followed the script in set one of their gold medal match. What transpired was like set three between the Philippines and Thailand wherein the home team fought valiantly to make the 11-time defending champions feel tense.


But in the end, Thailand's superiority in volleyball allowed them to escape troubled waters. The Thai senior women's team remain undefeated in the 2019 SEA Games after a 34-32 third set. Meanwhile, 3BB Nakornnont stamped their dominance after those early scares to win the RVL 2019 National Finals championship.


Thailand's volleyball supremacy in Southeast Asia remains intact. But despite the losses, the Filipino teams, both in the SEA Games and the RVL, feel like winners because they can compete against the powerhouse nation.


As for the Rebisco Volleyball League itself, it makes every athlete a winner because they get to hone their skill against other champions. The more they develop, the brighter the future of Philippine Volleyball is.