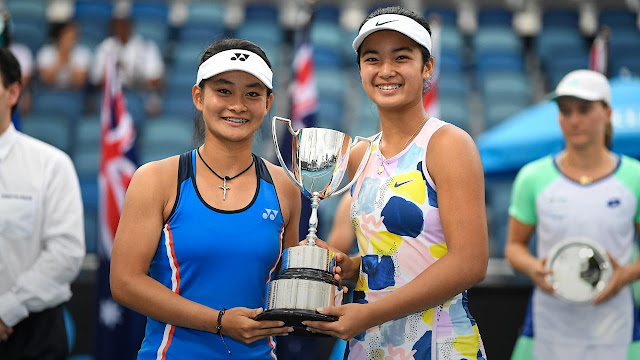 MANILA--Exactly 11 years since the Philippines witnessed its first ever Grand Slam champion in either professional or junior level, Alex Eala replicated history and carved her name into the country's young tennis community after winning the 2020 Australian Open junior girls' doubles title alongside Indonesian rising star Priska Nugroho on Friday afternoon.

Fourth seeds Eala and Nugroho registered what has been one of the fastest title-clinching victories in the history of the Australian Open after needing only 49 minutes to defeat the unseeded tandem of Ziva Falkner and Matilda Mutavdzic, 6-1, 6-2, at Melbourne Park.

The Southeast Asian pair was firing from all cylinders all throughout the match as they completely outclassed Falkner and Mutavdzic by hitting four service aces and 18 winners against only six total unforced errors.

After cruising past to a hot opening set start, Eala and Nugroho found themselves at the better end of the entire match and led to as high as 5-0, before Falkner and Mutavdzic held to love to prevent from being bageled, 1-5.

But it was only what the European duo could do.

With all things tied at 1-1 in the second set, Eala and Nugroho got up by a break, 3-1, before winning three of the next four games to eventually sealed the title that assured the Philippines its first ever trophy in any majors tournament since 2009.

"First of all, I would like to thank my partner [Priska] for playing with me. This is an amazing week. Thank you to the organizers and everyone who made this possible. Congratulations to the runners-up, you did really well this week. Thank you to my team, my family, the Rafa Nadal Academy for all their support. Thank you also to all the fans who came to watch out and to who are watching from home, you gave us a lot of motivation and inspired us this week," Eala said after the match.

"I am really happy to be here and it's been a great tournament and I am happy I got to be a part of it," she added.

Eala's victory meant something for the Filipino tennis fans and the whole Philippine tennis community in general as she made history to become the second Filipino Grand Slam-winning player to hoist an Australian Open title, or any Grand Slam trophy, since then seventh seeds Francis Casey Alcantara and Chinese-Taipei's Hsieh Cheng-peng won the 2009 Australian Open junior boys' doubles tournament.

Coincidentally, Alcantara and Cheng-peng defeated unseeded Mikhail Biryukov and Yasutaka Uchiyama, 6-4, 6-2, to claim the victory at the same venue.

Eala, who is also a full-time scholar at the Rafa Nadal Academy, has been already pairing up with Nugroho since 2017 where their partnership earned them a Doubles of the Year recognition from Tennis Europe during that year after winning five doubles titles, including an impressive four 14 & Under Category 1 events, and one 16 & Under tournament, and went unbeaten in 21 matches throughout their entire summer tour of Europe.