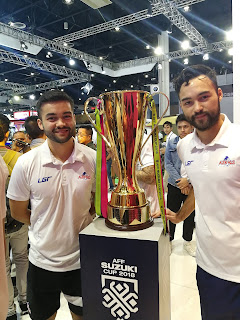 Manila, Philippines - For two days in a row, Ceres-Negros FC Head Coach Risto Vidakovic were so grateful that Fil-German Manny Ott has decided to come home and don the yellow and black colours once again.

Ott has had a stint at the Thai Premier League team; Ratchaburi but an injury sidelined him for quite a while.

Now fully recovered, Ott found his way back to the Philippines and re-joined Ceres-Negros FC - the club he played for alongside his younger brother; Mike.

He, together with players like Mark Hartmann and Josh Grommen were the latest additions of the Bacolod-based club to boost their rally for the AFC Champions League and the AFC Cup.

"Manu is one of the best, if not the best midfielders in the region," says Vidakovic at the press conference of their match against Cambodia's Svay Rieng FC, Monday afternoon.

Vidakovic knew that a player with the same calibre as Ott is something that teams from Southeast Asia, particularly in football powerhouse nations like Thailand, Vietnam and Indonesia, are after.

The Ceres-Negros gaffer cited that a lot of teams in the region wanted Ott in their line up but opted to come home and play for his mother club once more.

Ott did not disappoint.

He played as if he did not come from an injury that kept him on the sidelines for a long time, Ott was very solid in the midfield as he was part of the starting eleven of the match against the visiting Cambodian squad.

Ott teamed up with Stephan Schrock to keep a very solid midfield, resulting to the bus men owning most of the possession in the entire game.

He was even one of those Ceres players who made a decent attempt at the goal only that it goes wide.

Ott kept the midfield intact for Ceres up until Dylan de Bruycker came in to replace him at the 85th minute of the game.

Ott's stellar performance on his first game back  in the Philippines may not reflect on the score sheet but it was that good enough for their Coach Vidakovic to assess that the Fil-German player did have a good game.

"Again, I am saying that Manu is without a doubt the best midfielder in the region. A lot of teams are going after him but we are so glad that he chooses to go back to Ceres and help us out in our AFC Cup matches," Vidakovic mentioned at the post-match press conference at the Rizal Memorial Stadium as Ceres-Negros prevailed over Svay Rieng FC; 4-0.

Ott's presence in the midfield provides added threat for Ceres-Negros as they keep their might at the helm of Southeast Asia. See more of him and the rest of the team as they continue to represent the country in the AFC Cup, with them hosting the Vietnamese club, Than Quang Ninh on the 25th of February and Indonesia's Bali United on the 11th of March at the Rizal Memorial Stadium.