Manila, Philippines - The NCAA Management Committee, headed by Mr. Peter S. Cayco of the Arellano University releasead a memorandum on Thursday afternoon ordering the indefinite postponement of the games in the Senior's Division of the league.

On the directive that is signed by all representatives of the 10-member schools, the Management Committee announced that the postponement will take effect on Friday, 14 February 2020 as a precautionary measure amidst the COVID 2019 outbreak.

Also stated in the memorandum that the new schedule of the postponed games will be announced once it becomes available and will heed on to the guidelines and directives of the DOH, DepEd and CHED.

"While we are mindful of the importance of holding the games, the health of the students is our top priority," the statement reads.

Below is the copy of the memorandum released by the NCAA: 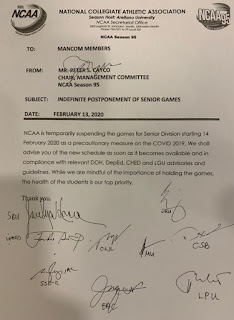 Yesterday, the UAAP also announced the temporary suspension of the games following the safety precautions against the COVID 2019 outbreak.