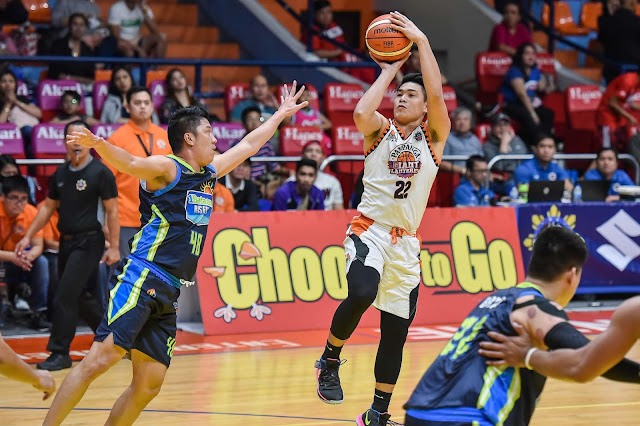 MANILA – Pampanga Giant Lanterns gets one game ahead of their Central Luzon neighbors as they beat 1Bataan Risers, 71-64, to open the Chooks-to-Go MPBL Lakan Season Playoffs on Saturday night at the FilOil Flying V Centre in San Juan City.

It was both ex-pro players Levi Hernandez and Reil Cervantes who banner the ADG Group of Companies-backed Pampanga, as Hernandez tallied 18 points in 8-of-15 shooting, while Cervantes get 13 points in just 15 minutes.

It was all-star Ryan Batino who stop the bleeding for Bataan with a driving layup after more than five minutes of Pampanga’s onslaught.

The lead blew up in Pampanga’s favor, even reaching the 30-point gap just a minute before halftime thanks to Jeric Fabian’s layup.

But Bataan refuses to let down easily with a comeback in mind, as Ryan Batino rised up with a huge 23-8 third quarter.

Pampanga however decided to close the game in their side even as their rivals shed the lead back to single digits before the end of the game.

Batino led Bataan with 19 points in 27 minutes in 8-of-11 from the field as well as 10 boards, two steals and a block, while Gino Jumao-as tallied 12 points, six rebounds, four dimes, and two steals.

Pampanga will look to close the series on Thursday at their own hardcourt inside Angeles University Foundation Gym.