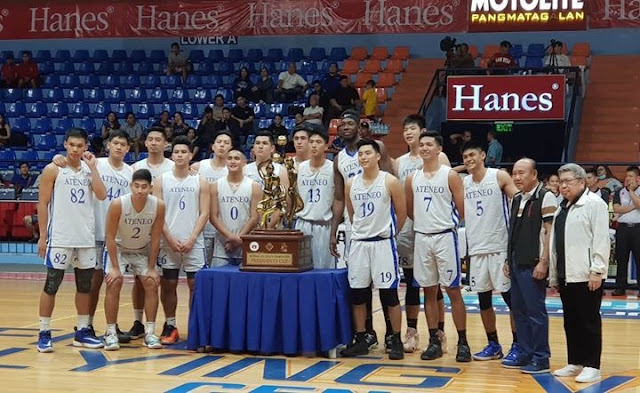 By Drew Malihan
MANILA – The Ateneo Blue Eagles pulled off a fourth quarter fightback to prevent a UST Growling Tigers comeback and grab their second win of the PCCL NCAA-UAAP Challenge, 82-71, at the FilOil Flying V Centre in San Juan City on Sunday night.
The Katipunan-based squad’s defense limited the Tigers to just six points in the final canto after a 17-point lead was cropped down to just one.
Ateneo and UST saw a rather physical game with 64 combined fouls and Pat Maagdenberg and Ira Bataller fouling out in the latter half of the game.
SJ Belangel once again showcase his shooting with 26 points including 6-of-9 from the rainbow territory along with two rebounds and two steals to led the boys in blue.
Ange Kouame shone with a double-double of 15 points and 13 boards along with a game-high five blocks.
Rhenz Abando meanwhile led the España-based team with 14 points and five rebounds and an assist, CJ Cansino drops 10 along with five boards, and Mark Nonoy tallying nine points and four rebounds
The trio, however, combined for just 10 made shots in 34 attempts, including 6-of-21 from three.
Unheralded forward Vince Cuajao meanwhile showed hopes for UST with 14 points in 5-of-10 shooting.
Ateneo, already ensuring their place in the PCCL Final Four, will face Letran in a champion versus champion match on Saturday, while UST will attempt to save their slot against San Beda.
Box Scores:
Ateneo (82) - Belangel 26, Kouame 15, D. Ramos 8, Daves 7, Mallillin 7, Chiu 5, E. Ramos 4, Navarro 4, Tio 4, P. Maagdenberg 1, E. Maagdenberg 1, Mamuyac 0, Credo 0.
UST (71) - Abando 14, Cuajao 14, Cansino 10, Nonoy 9, Concepcion 8, Manalang 3, Paraiso 2, Ando 2, Bataller 2, Manaytay 2, Garing 0.
Quarterscores: 29-15, 48-38, 66-65, 82-71.
Follow him on Twitter: @drewmalihan