Bacoor City's Gab Banal hopeful to be cleared for do-or-die Game 2 vs. Basilan

Bacoor City's Gab Banal hopeful to be cleared for do-or-die Game 2 vs. Basilan 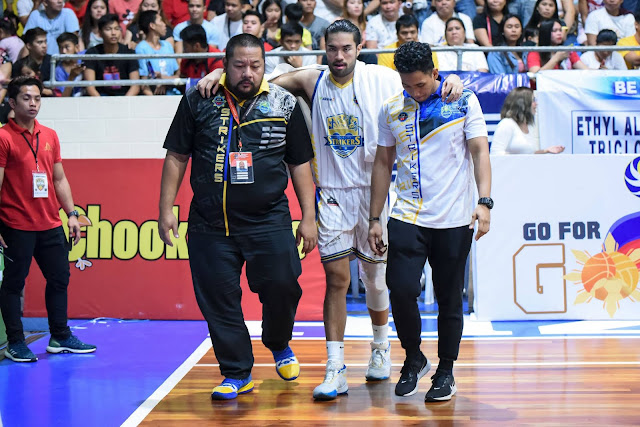 DAVAO CITY -- Gab Banal was frustrated in the second half of their 2020 Chooks-to-Go MPBL Lakan South semifinals bout against third seed Basilan-Jumbo Plastic.

With 1:19 left in the second period, Banal had a collision with Steel's Allyn Bulanadi, causing him to injure his left knee and leave the game. He was unable to come back in the second half, with his knee wrapped.

With second seed Bacoor's main gunner out, Basilan pounced through and through, clobbering the Strikers, 77-63, Monday at the RMC Petrogazz Arena here.

The Strikers really felt the missing 14.12 points, 6.16 rebounds and 5.84 assists norms of the reigning MVP.

"Gab is probably our best facilitator. He is our gravity guy. He attracts a lot of defense. Losing him early, we were beaten in probably every statistical category," said Bacoor coach Chris Gavina.

But the 29-year-old Banal remains hopeful, as he did not hear something "pop" in his knee when he fell down.

"Hindi ko mai-bend yung left knee ko pero I did not hear anything pop so I would like to get the Game Two in Bacoor if payagan ng doctor."

Banal finished with just six points on 1-of-5 clip, along with four assists against five turnovers.

But come Friday, together with the 6-foot-3 guard will be a raucous Game Two crowd at their home turf at the Strike Gym in Bacoor, Cavite as they look to even the series.