The Ultimate 3-step Guide to Watching Cricket as a beginner

The Ultimate 3-step Guide to Watching Cricket as a beginner 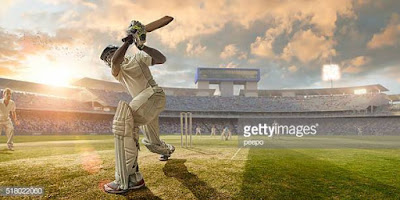 Cricket is a no-contact game played on a cricket field. The field is a 20-metre pitch with a wicket at both ends, each with two wooden bails balanced on three stumps.

This bat and ball game is played by both men and women (in separate games). With two teams and eleven players on each team, the batsman’s team scores by preventing the opposing team from hitting the stumps and bails behind him.

This is done by successfully hitting the cricket ball with his/her bat, and scoring as many runs as he can.

Meanwhile the members of the other team are on the field trying to prevent scoring and put the batting players out, more like baseball. Once ten batting members are out, the team switches roles.

When all the innings of the team that has fewer runs have been completed, the team with more runs wins the game.

How did Cricket originated?

Being featured in countless sports magazines, blogs and news like Cricbuzz, Star Sports and the Cricketer Magazine, the cricket sport easily became one of the most popular sports especially in commonwealth countries.

Theoretically speaking, if you borrow the amount of 1 USD for every follower of the sport, you’ll be borrowing a big amount because the cricket sports have over 2 billion+ followers.  It dominated countries like England, India, South Africa, Bangladesh, Australia, New Zealand, Caribbeans and Pakistan.

However, even if the sport had the highest fan following among all sports in the world, a large chunk of the global population remains oblivious to its existence.

As you buy a property or rent a condominium on your next trip to countries like Australia, India Sub-continent and England, you should know that one of the most popular sports globally owes its popularity to these places. In fact, all lands colonized by Great Britain adapted the sport of Cricket.

Known as England's national summer sport, cricket was played as early as the 13th century and is now played all over the world. So if a family member or a significant other is a big fan of the sport, and you want to join in the fun, then keep reading because...

Like I explained earlier, cricket is a bat and ball sport with two teams of 11 players. The team that scores the most runs in its innings wins the match, more like baseball. However, the equipment and the field are different.

Note that the cricket’s bat is made with a long rectangular wooden bat ( usually 38 inches in length and 4.5 inches in width with a handle and a shoulder), and the ball is quite heavy and is  made out of leather, cork and string.

It’s played on an oval field with a 22-yard pitch at the center. At each end of the pitch, three wooden sticks are dug into the ground  with two wooden bails on top.

There are thirteen players and two umpires on the field. Two of the players are batsmen and the other eleven players are of the fielding team. The rest of the batting team are off-field.

When the game starts , the person throwing the ball known as the bowler aims to hit the stumps when he bowls. On the other hand, the player with the bat known as the striking batsman attempts to keep the ball from hitting the stumps with the use of the bat.

Unlike baseball, the batsman can hit the ball anywhere he wants. There are no foul areas including behind him. There's also no strikes. He/she can choose not to swing however much he likes. Also, running after hitting the ball is not compulsory.

If the bowler was able to hit the stumps, the striking batsman is out. This method of getting the batsman out is called bowled.

But the thing is, preventing the bowler from hitting the stumps isn’t the only goal of the batsman. He also has to score runs. This is where the second batsman comes into play.

The runner must ground some part of their body or their bat  beyond the crease (the white line drawn at both ends) at their respective ends to complete a run.

If a fielding member or bowler throws the ball and knocks the stump or bails before the batsman makes it to the end where the ball was thrown to, then that batsman is considered out. His method of getting the batsman out is called run out.

Another way of trying to out the batsman is by the method called caught which works the same way as baseball. The batsman is out once he/she hits the ball and the field players catch it.

The batsman also scores runs if he/she hits the ball beyond the outer boundary in the air. If the ball hits the ground without passing over the boundary, it's called a four, and it's good for 4 automatic runs.

It's called Six ,accounting for 6 automatic runs, if it goes over the boundary before hitting the ground.These runs are automatically added to the score of the batting team.

You now know the basics of cricket. You can finally watch the game with a loved one or enjoy the game on your own. But one last rule to watch out for, and that's the concept Leg before wicket (LBW).

By the way, in cricket the umpire's signal for out is raising one's index finger. So if you see the umpire doing so when the bowler hits the gear or the body of the batsman, then rest assured it's a case of LBW.

Now that you know the basics, know that the game starts with a toss. The winning captain will pick if they will start as the batting team or the bowling team.

For the batting team, 2 batsman head to the field and the rest are off field. Only one batsman can be ruled out at the time, and as one batsman gets out, another batsman comes in to replace him/her.

Meanwhile, on the fielding team, the bowler is only allowed to ball 6 legal balls, then another bowler must take over. This lot of 6 bowls is called over.

The inning continues until 10 batsmen of the batting team are out, the max number of agreed overs per innings (20 or 50) has been bowled.Then the roles reversed.

Like I said, once ten batting members are out, the team switches roles. The team that scores the highest number of runs after the conclusion of their over wins the match. Pretty simple right?

In general, trying to learn how to understand cricket… whether it's for your own enjoyment or to bond with your dad or significant other...it's easier than you think. You might even realize it's the new sport you'd always look out for.