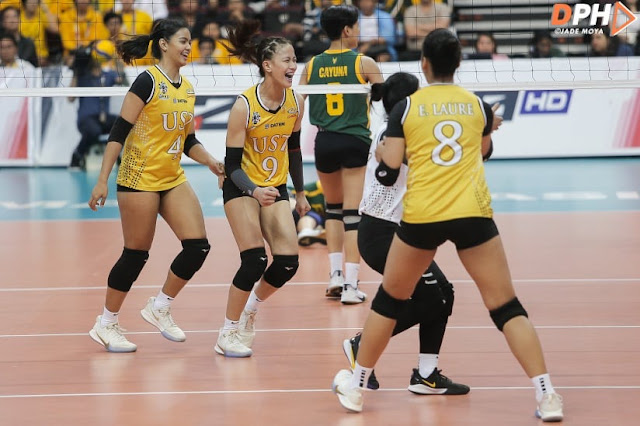 PASAY CITY - After losing in their first match against NU, the UST Tigresses finally made a comeback as they defeated the FEU Lady Tamaraws in straight sets, 25-20, 25-16, 25-18 in UAAP Season 82 Women's Volleyball Tournament, Sunday afternoon at the Mall of Asia Arena.

Lady Tams had a 4-0 run when the first set was about to close, making it 19-21 but later on commit errors. Ennajie Laure closed the first set with an ace.

As second set opens, FEU tied with UST at 3-3. In the middle of the set, Martha Mora entered the game, contributing 3 consecutive services aces that gives Tamaraws a 3-0 run, making the score closer, 11-14.

But the Lady Tamaraws still fell short in midway of second set when UST stops the bleeding with a 7-1 run. Ysa Jimenez enters in the latter part of the game, contributing back-to-back attacks that closed the set.

In third set, Morayta-based squad tried to fight in the latter part as they had 7-0 run, pinning it on 17-23, but rookie Baby Love Barbon completed their sweep with an off the block hit.

Sophomore Eya Laure dominated with 12 attacks, three blocks and an ace, together with her sister Ennajie Laure, who contributed 10 attacks and two service aces.

Seniors Czarina Carandang and Jeanette Villareal led the Lady Tamaraws as they both contributed seven points.

UST Tigresses will face the DLSU Lady Spikers on March 15, 10:30 AM at Philsports Arena, while the Lady Tamaraws will try to get back at the winning column as they face the Adamson Lady Falcons on March 11, 3:30 PM at the Mall of Asia Arena.