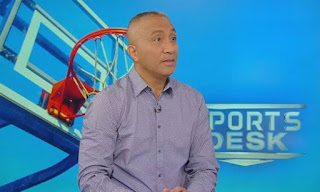 Manila, Philippines - Before all the glamour and the citations given to Coach Ronnie Magsanoc, he was foremost a Fighting Maroon. He was part of the 1986 team that clinched the UAAP Championship that marked the beginning of a long standing love affair between him and basketball.

On Tuesday night's episode of The Ultimate Fan Hub Podcast, Coach Ronnie was not able to escape answering the show's staple "One Thousand Peso Question" wherein he has to pick three persons who he thinks deserves a spot in a thousand peso bill if the University of the Philippines is to release its limited edition version of the bank note.

Previous guests of the show answered the question naming three names from their team, Magsanoc, however veered away from the usual possible answers, rather gave the spotlight to three persons from UP, who were all influential not just to him, but the rest of the Fighting Maroons of his time.

He added that it is also Angara who introduced them to people that they can talk to in terms of asking help on their grades. Magsanoc thinks that it will be a fitting tribute for Angara to be named as one of the greatest Fighting Maroon.

"Second on my list is Coach Joe Lipa because had it not for him, hindi naman kami makakarating sa UP. Coach Joe is already a success bago pa kami makarating sa UP. He was able to Coach the Maroons into the finals against UE, if I'm not mistaken, two years before we came in so he should be in the list," Magsanoc said

But the third person on his list came in as a surprise because Coach Ronnie did not name a player nor a coach but their team utility; Mang Rod.

While Coach Ronnie also attributes former team mates like Coach Eric Altamirano and Benjie Paras, he thinks that these three people whom he picked as his top 3 are an essential factor in whatever success that the Fighting Maroons had through the years.

"These three are the essential behind the scenes, except for Coach Joe, but are ultimately responsible for helping out not just that particular year but in the many years to push the basketball program sa UP at yung makatulong sa mga student-athletes na rin." Magsanoc explained.