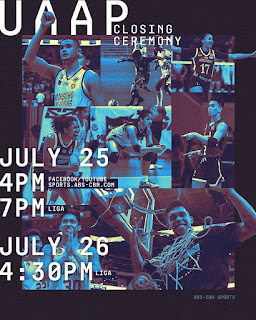 MANILA--Despite an abrupt end to UAAP Season 82 due to the COVID-19 pandemic, the country’s premier collegiate league will officially wrap up the season on a high note with a virtual closing ceremony that will celebrate unity and sportsmanship in the entire UAAP community.

The special online event, hosted by Mico Halili and Denice Dinsay of ABS-CBN Sports, will go live on Saturday at 4 p.m. on the ABS-CBN Sports website, Facebook, and YouTube accounts, with delayed telecast on Liga cable sports channel at 7 p.m.

The closing ceremony will be a culmination of the first and second semester UAAP sports, highlighting the success and hard work of the eight member schools while also putting the spotlight on the athletes who were unable to finish their season due to the cancellation of the games.

“Lalabas 'yun doon sa closing ceremonies, just to highlight na, one, as a community, as a nation, we are here to help everyone, that's one. And two, itong mga atleta na 'to na mga hindi nakapaglaro or natapos, they are part of Season 82," said UAAP Season 82 president Em Fernandez of host school Ateneo de Manila University in an interview with ABS-CBN News.

UAAP announced the cancellation of Season 82 on April 7 due to the COVID-19 pandemic. Second semester sports such as volleyball, football, baseball, softball, track and field, lawn tennis, and 3x3 basketball were not completed or did not start at all.

The UAAP will also be awarding UST as general champions for both the high school and seniors divisions. This is the sixth straight overall championship for the Tiger Cubs and fourth straight for the Growling Tigers.

Also set to receive their awards are the Season 82 MVPs for high school and college, while selected athlete-scholars from the different universities will also be recognized.

The online gathering, according to ABS-CBN Integrated Sports head Dino Laurena, will celebrate the dedication of all athletes and the efforts of the entire UAAP community, noting that it has always been their mission in ABS-CBN Sports to honor and pay tribute to the work and dedication of athletes, no matter what the circumstances or challenges the sports organization is confronting.

“ABS-CBN Sports remains faithful to its advocacy of promoting the values that sports teaches all of us. It is in this light that we want to pay tribute to our athletes who put in months of sacrifice and preparation to be able to play at a high level in the UAAP. We hope they stay hungry and passionate about the game they love, and we cannot wait to see them playing again,” he said.

Spicing up the celebration are feature performances by ABS-CBN artists Ylona Garcia and Inigo Pascual. Sponge Cola and Itchyworms, the Pinoy rock bands that performed the official UAAP Season 82 anthem “Ang Ating Tagumpay” at the opening ceremony, will also make a special appearance.

Sticking to Season 82’s theme of “All For More,” the UAAP will also recognize the efforts of schools and athletes by honoring those who have done charity work during the pandemic. Fans will also be able to look back at last season’s game highlights as well as hear from some of their favorite players. To formally symbolize the end of UAAP Season 82, there will be a virtual turning over of hosting duties of Ateneo to its rival school De La Salle University for Season 83.

ABS-CBN Sports has been the official broadcaster of the UAAP since 2000. Together, they have championed sports among the Filipino youth, have given a break to many young, talented athletes, and strengthened the local sports community in the past two decades.

Celebrate sports culture in the Philippines with Kapamilya sports fans by watching the UAAP Season 82 closing ceremony on Saturday at 4 pm on the ABS-CBN Sports website (sports.abs-cbn.com) and ABS-CBN Sports Facebook and YouTube accounts. Catch also the delayed telecast on cable sports channel Liga at 7 p.m., with a replay on Sunday at 4:30 p.m.