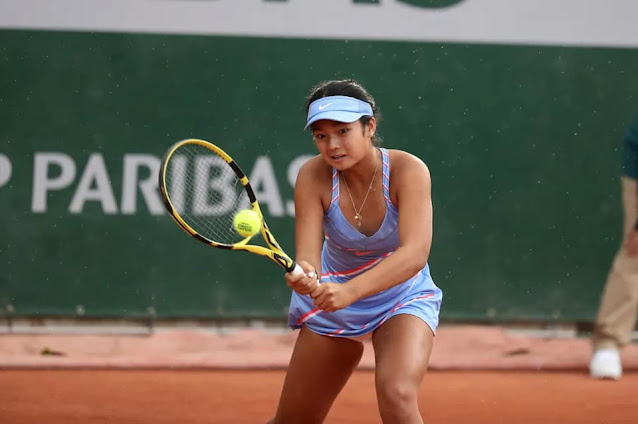 MANILA--Teenage tennis star Alex Eala displayed an emphatic return game in the decider to overwhelm Spain's Leyre Romero Gormaz in three sets, 6-1, 4-6, 6-1, and book a place into her first ever Grand Slam quarterfinals at the 2020 Roland Garros in Paris, France last night.

After succumbing to a narrow defeat in the second salvo, Eala quickly rolled out to an astonishing 4-0 lead in the final set before she closed the match after one hour and 48 minutes at the chilly Court 10 by winning two of the last three games, highlighted by a massive hold in her final service game.

Eala, who is seeded second in the week-long tournament, is now assured of a new career-high ITF juniors world ranking by racking up additional 300 points to her current 1718.75 after reaching the last eight in the French Open.

She has already overtaken France's Diane Parry (1967.5 points) and Daria Snigur (1930 points) of Ukraine, who both opted to skip this year's tournament, and barring unforeseen circumstances, Eala can become the Philippines' second juniors' world number one since Manny Tolentino after this year's title-favorite and top seed Victoria Jimenez Kasintseva got stunned by unseeded Russian Alina Charaeva in the second round.

The current world number four continued to rely on her equally impressive all-around play as she won 56% (45-for-81) of her receiving points against Romero Gormaz and converted eight of her 14 total breakpoints to complement with her strong service game.

After posting much better numbers on Wednesday evening, Eala, who had only committed nine double faults all throughout the competition, including one in her battle against Romero Gormaz, is able to get 62% of her first serves in since the opening round, despite still not having at least a single service ace.

Eala, who is the highest seeded player left in the draw, will next face ITF juniors' world number 33 Linda Nozkova of Czech Republic, who had three clay-court titles last season.

On Tuesday, Eala and her American partner Elina Kalieva of the United States bowed out of the girls' doubles competition after losing to unseeded Italians Lisa Pigato and Eleonora Alvisi in a three-set thriller, 7-5, 2-6, 10-7, erasing the Filipina's hopes to repeat as a Slam doubles champion this year after she and her Indonesian partner Priska Nugroho ruled the Australian Open girls' doubles tournament in Melbourne last January.