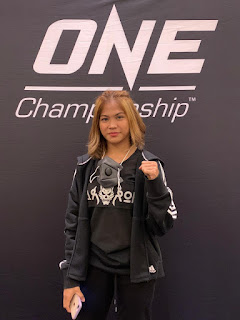 With Lee-Pucci expected to be out until some time in the middle of 2021, Zamboanga, the unbeaten Filipina stand out, has to wait again to get her title shot.

But if Lee is to be asked, Zamboanga still needs to prove that she indeed is the number one contender for the women's atomweight belt.

“Honestly, even though Denice beat Mei Yamaguchi, I don’t think that alone qualifies her to be the number one contender,” said Lee on Wednesday.

Zamboanga, whose brother Drex is a world champion in his own right but just began carving his own path at One, defeated Watsyapinya Kaewkhong at One: A New Breed 1 on Aug. 28 at the latter's hometown, Bangkok.

But the mere fact that Kaewkhong is not ranked led to Lee's reservations.

"The other girls that she fought were not even ranked. The atomweight division is stacked with at least 10 top talents. I think that Denice should have to face the top 10 girls first to truly prove herself as the number one contender," she further said.

Lee believes there is only one way Zamboanga can do that.

"The One Atomweight World Grand Prix championship is the perfect way to do that," Lee bared.

On Tuesday, One chief executive officer Chatri Sityodtong announced in an online press conference that a grand prix is being set up in the women's atomweight division with the winner getting a shot at Lee's belt.

"I anticipate the atomweight grand prix to start in January," Sityodtong said.

Lee believes Zamboanga will get an invite to the grand prix, but Lee also suggested some big names as well.

“One Championship recently revealed the Top 5 rankings in the atomweight division, which had Denice Zamboanga, Meng Bo, Lin Hequin, Mei Yamaguchi and Gina Iniong. I also think that Stamp Fairtex, Itsuki Hirata and Jihin Radzuan should be in the mix,” said Lee.

Zamboanga introduced herself to the One community by shocking Radzuan at One: Mark of Greatness on Dec. 6 last year at the latter's hometown of Kuala Lumpur.

Like Zamboanga, Iniong was once primed for an opportunity to face Lee for the women's atomweight gold.

Iniong beat Yamaguchi at PXC 43 in Pasig in 2014 and also got a piece of Radzuan at One: Clash of Legends last year in Bangkok.

Stamp, on the other hand, was a stablemate of Zamboanga at the Fairtex camp before the latter began doing her own ventures with Drex.